I remember the 'phone call.

It was September 2012. It was HOT. I was standing outside the Red Lion in Gravesend, about to play keys with one of my other bands at their Really Red Roar Festival (in fact, I've just found a video of it here). I was supping on a pint of Guinness and discussing the various merits of Queensrÿche with Paul Naz when my mobile rang. It was Our Intrepid Leader.

"How d'yer fancy a week in Greece next June, chap?"

Some months and lots of rather panicked emails and phone calls later, I put my suncream in my rucksack and headed to Cambridge. This was the first leg of a 2,000 mile journey from my front door to the sunny village of Lindos. Lindos is a village (and archeological site of some interest) on the Greek island of Rhodes, and host to the 2-week classic rock festival we had been invited to take part in.

I was met at Cambridge by The Rhythm Section. I hopped in the car to join them for the drive up to Dugginson Heights, located in a rather nice suburb of north west Leeds. Spanko "toast and hot chocolate, please!" Harris and I sat in the front, with our guest drummer for the week sat in the back surrounded by far too many large suitcases. Cameron "Nicko McBrain Junior...Junior!" Spence and his father Spanko had each brought two enormous pieces of luggage, which caused me some concern given the size of his motor. We would have to get 5 band members (complete with at least 3 fat arses), all associated luggage, 3 guitars and Spanko's pedal board in the car for the drive to the airport in the morning! Putting that fear aside, I sat back to enjoy the drive and the company. The sheer enthusiasm we all had for music while sat in that car was quite exhilarating. We arrived safe and sound oop North around 7pm, and unloaded the car so that the boys could rethink their wardrobe strategy for the week!

Bruce "that rabbits dynamite!" Dugginson hadn't quite made it home from work yet, so we sat around with his lovely ladyfriend and awaited him. Just after he arrived, Spanko and I headed out to pick up Our Intrepid Leader at the train station, Our beloved Adrian "Grandalf" Swift has been without a car for a while, and is now a rail traveller like myself.

Back to a memory of another 'phone call. I called Duggers to make the final arrangements for kipping over at his the night before the flight, and distinctly remember him saying to me that we'd just have a light one, maybe some dinner and an early night. Immediately thereafter I called Swift to finalise arrangements with him and relayed Dugginson's message. To which Swift said, "Ah. That'll be us all getting clanged, then!"

My worries about car space, as many of my worries ultimately do, proved unfounded and all of us fit comfortably in (albeit with Spanko's bass across the laps of those in the backseat). The drive to Manchester Airport was free and easy. Manchester Airport itself was a clusterf**k. Queues and queues and queues and queues. We had arrived 2 hours prior to our flight as advised, yet we were still called out of the first queue to head for the priority check-in desk, delayed at security (although that was partly due to the two Northerners in the band forgetting to take their belts off before walking through the scanner), and found ourselves trudging to the gate as the final call was given. Not the stress-free start to the trip I was hoping for!

Thankfully, after that it was smooth all the way. The flight to Rhodes was uneventful but full, and didn't seem to bother our resident nervous flyer too much. Once landed, we collected our gear from the conveyor and, after checking it had all arrived intact (always a worry!) we headed for the airport transfer the organisers had laid on for us. "Rock and roll!" said the man who took my guitar and loaded it into the back of the bus. It was! The drive to the village was about an hour, and in no time at all we had arrived in Lindos. Which was, quite simply, stunning.

Arrival in Lindos I... 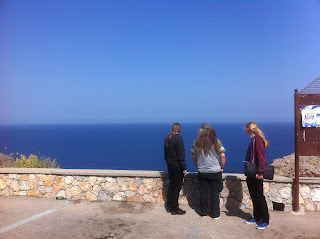 II: In which Justin Lee Collins Swift ensures his 'equipment' has arrived safely. 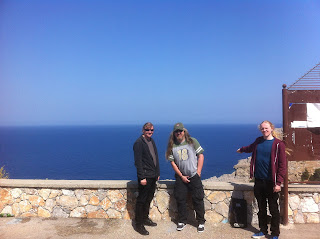 Cats! Crepes! Crap jokes! We might even play a gig!