On a normal working day, your humble narrator gets himself out of bed at 7am. He attempts to consume some sort of sustenance alongside a cup of tea, normally watching the news or mucking about on the internet. With his hunger satisfied he performs his ablutions, dons his suit and buggers off.

On a Saturday, his usual mantra is: "Don't wake me, I plan on sleeping in." But not this Saturday. This Saturday, which just so happens to be one equinox or the other, his weekday routine is repeated (sans suit). The journey to Tavistock is a lengthy one, and he wants to be there with time to savour a tasty pint of finest Devonshire ale with his Yorkshire bandmates who have already got most of the miles under their belts. 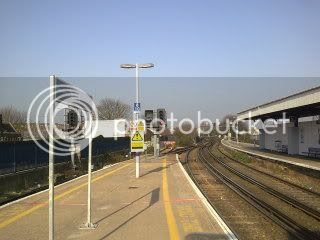 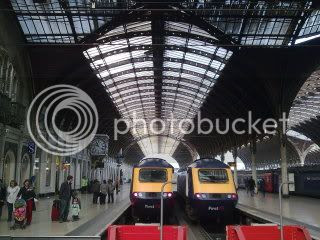 The trusty interweb tells me that the nearest station to The Wharf is Gunnislake, one of the first villages past the border with Cornwall. Gunnislake is reached via Plymouth, and so I sit speeding to the west on a beautiful sunny day. I really do rather like train travel. When everything is running smoothly (which it is today thus far), it really is the most relaxing way to travel. Miles of green English countryside either side of the steel. I'll stop there before I become a trainspotter. 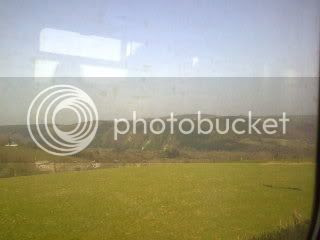 We're making a recording of tonight's show, and as such the setlist is packed with spectacular slabs of the finest Maiden we can muster. The foreknowledge that your performance is being laid down for posterity is often a daunting bit of information. I vehemently dislike making mistakes on the best of nights, and while the professional in me doesn't let a Brown Note spoil the rest of the show it is often the thing I remember most clearly afterwards. There are also a couple of solos that I nearly always trip up on because, to be honest, I'm not Dave Murray. The wig gives this away somewhat, but the fingers do more of the talking. Confidence in my own performance has never been my strong point, and although I know that I do a more than competent job in this band I do still hope Adrian "a bit of an accident with the ol' Jagermeister" Swift doesn't have to replace too many of my solos with his own more experienced fingerwork! 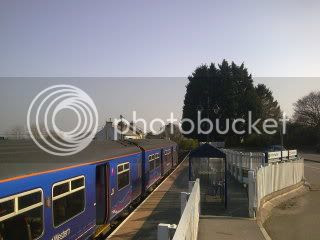 Gunnislake II - end of the line 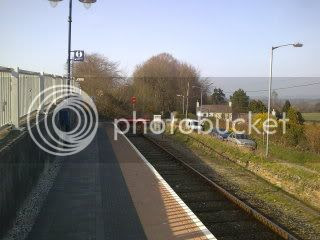 I arrived at 4pm to find the rest of the band already here. Thankfully this meant that practically all the gear was out of the van and on the stage, so I set up me gear in record time and fucked off back to the dressing room! Messrs Swift and Speed "your wood vibrates at G sharp?" Harris were concerning themselves with aesthetic matters, while all myself and Bruce "the scaffolders were bastards!" Dugginson wanted to do was have a cheeky pint of Tribute as we had planned to do before settling in. Perhaps time for that later. For now, having only eaten a piece of toast today I have the shakes. Some grub is sorely needed - last time we were on these grounds (which, let me say, are rather spectacular) we were treated to a barbecue. And then an argument about whether we were doing two sets or not. 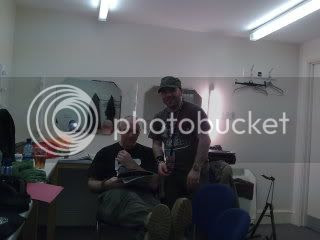 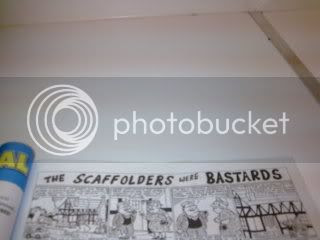 Reading my last sentence back, it seems like a little bit of history repeating (to quote the Propellerheads). We soundchecked, had a bit of barbecue, and then an argument about whether we were doing two sets or not! Needless to say, common sense prevailed and one set was agreed on. Before going on I settled in with a pint of Tribute (found at the bar in the venue - genius!) and had a chat with Daryl and Pat who were kindly filming us from the side of the stage. They've seen most of the tribute bands who come through this venue, so we swapped stories of primadonnas and a certain Geordie c*nt for a brief while until it was time to wig up and rock out. I walked out onto the stage to turn my amplifier on (got to let those valves warm up, boys and girls) and to my astonishment the crowd was HUGE. This was going to be a good night. 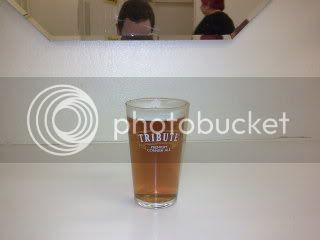 Bloody hell, that were a good'un. Running out onstage as the Moonchild intro kicked into gear the crowd went nuts. This is what it should be like every week!! With the current economic climate, venues are dying and people haven't been going out as much. This has been a cause of great frustration for us and other bands of our ilk. Last night was exceptional - Tavistock, you're a fucking noisy bunch! Opening up with Moonchild, I was conscious of the recording and concentrated extra hard on locking in with the rest of the band. Going for that rather splendid tapping solo I found myself nearly knocked over by Mr Dugginson, sending my fingers into a flurry of Brown Notes! Still, never mind - that's what overdubs are for! 2 Minutes followed in fine fashion, though Speed was having a few gear issues - he knocked his wireless transmitter out of his jack, which meant no thunderous bass for a few bars. It's moments like that when you realise how much that enormo-amp contributes to the sound of this band. My sound however was lovely - I don't often get the chance to crank that amp as we play slightly smaller places a lot of the time. When it's up to eleven, it's a heavenly sound that really does make me tingle in my special place. The Prisoner made a welcome repeat appearance, although I right royally ballsed up the first pre-chorus earning me a disparaging glare from Mister Swift. Recording is always a mixed bag - we could have really done with two nights but it didn't pan out that way. Revelations, always one of my favourites, was storming.

Guitar solo from another dimension... 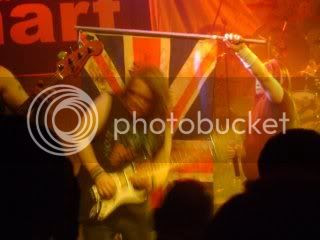 The real treat was to follow - Flash of the Blade is becoming a bit of a speciality. That song is so much fun to play, it almost hurts. A workmanlike Number of the Beast was plowed through before we got to the one I was waiting for - Alexander the Great. When the intro tape rolled I didn't sense much reaction from the punters. However they all went absolutely barmy at the end! Definitely a crowd favourite, and a bit of a highlight for me as well with that splendid melodic middle section. Children of the Damned and Rime of the Ancient Mariner were served up next (that's right, Rime and Alex in the same show), before a classic run-out: Flight of Icarus, The Trooper, Fear of the Dark, Hallowed Be Thy Name & Iron Maiden. Eddie "tchow!" The 'Ead showed up once again, bloody knife et al, throwing the ten ton finger at his helpless Devon victims. We legged it off and waited for the right moment to hit the intro tape for what was a fairly unconventional encore opener, Aces High. Listening to the tape, I was almost convinced I'd imagined the last hour and a half and we were about to start the show! Needless to say it worked really well, as did 22 Acacia Avenue which followed. Fearing we'd be lynched if we didn't, we bunged Phantom of the Opera in at the last minute before closing out with Running Free and Run to the Hills (five song encore - that's almost Turkey-length!). Absolutely cracking. I made plenty of silly mistakes in places I never normally do, which I guess is the curse of recording. Still, should be a reasonable document of a fantastic night.

After a short post-mortem I wandered out to the bar where I was immediately set upon by rabid groupies - spectacular! Lovely bunch of people come out to the shows here, Maiden fans through and through. I remember very few names, but thanks to Clayton (who actually reads this diary - oi oi!) and his ladyfriend Jody, Paul, Andrew, Andy, the tall bloke I was talking to about Pink Floyd and his pals....all of yer! Top people. Bring even more friends next time!!! A couple of sneaky pints later it was time to pack down. I got my gear all put away and then went for a quiet sit down in the dressing room with Dugginson and Harris.

A short drive to the Travelodge, quick bit of Ginsters and it was off to sleep. Poor Mr Harris has been struck with Devil Bug, and so took my mantle as the snorer of the band. I was on the floor, having decided that the backpiece of the sofa (dubbed "The Manic Cushion") had a few too many dubious stains on it. In no time at all it was daylight and time to head off - the Yorkshire contingent have a hell of a drive ahead of them, and myself and Nicko "orrrr that's goooood." McBrain Jnr have a three-hour plus train jaunt back home to Mother's Day. 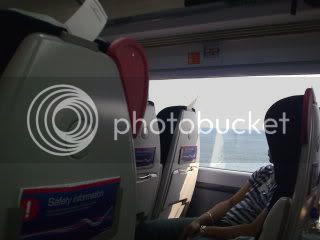 I will leave you with a selection of photos of Mr Dugginson, utilising a well placed domestic device to demonstrate...well, I'm sure you'll guess. Until next time, Tavistock - you fucking rock!!! 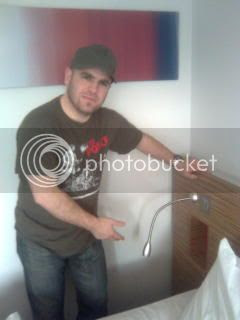 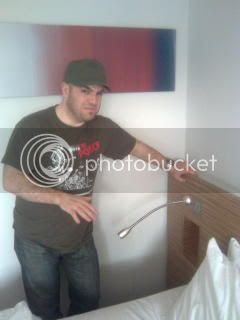 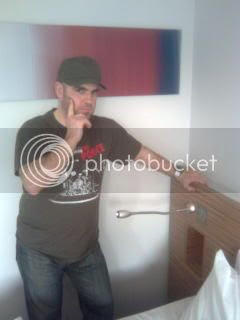 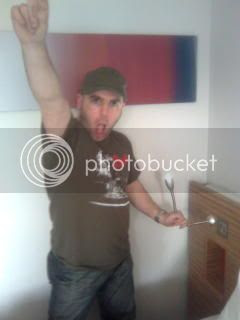 Posted by Christopher James Harrison at 7:31 pm No comments: