Back to Sawyers! We had a great time last year at this venue and I expect an even better night this time round.

My day started off easy with a mild hangover thanks to a booze-filled night of music composition the night before. Another scorchingly hot day, made even more onerous by the heavy rucksack and Gibson Les Paul Studio in a hardcase which had to be transported to a luthier in Westbourne Park. Avoid Denmark Street. They ruin guitars. This particular guitar has a tiny hump in the neck, which is not a mssive problem. I'm told this fella can do wonders with gutiars, so I've left my new baby in his hands until Wednesday when I need to pick it up for another rehearsal. Yes, Manic has been a busy boy during Hi-On's downtime! In the last few months I formed another metal covers band, joined a London-based singer-songwriter's group as guitarist and keyboard player, formed a minimalist/post-rock group and continued to write my own material. Music is the best, kids.

Leaving Dartford on the slowest train there is, I started listening to Maiden and making mental notes. It's been a long time since I played any (except The Trooper, which is a song the other covers band do). I'm very nervous about tonight. Will my fingers remember what they're supposed to do? Will it be odd returning to a Fender Stratocaster after months of playing nothing but a Les Paul? I should arrive at around 4pm to meet Bruce "stick it on t'end of yer feller" Dugginson who has been pottering around Northamptonshire on his own this afternoon.

I arrived at the venue to find Duggers hard at work in the dressing room scribbling lyrics out. Mister Bruce has been busy himself singing with several bands both original and covers. With a voice like that, it's no wonder he's in demand. This man's voice makes me wonder what it would have been like had Hi-On been fronted by him from the off - he's in a different league from just about every other singer I've ever had the privelege to share the stage with (especially that Biggest Dickinson fella....he was rubbish as Swindon fans can testify!!!) 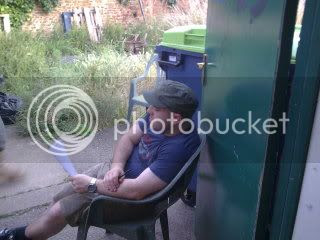 The rest of the band weren't far behind, and soon enough Adrian "would you rather die or have a fish shoved up your arse?" Swift trundled up in the hired Van of No Terror and Quite Acceptable Radio Reception. Having decided to wait for the other two before unloading the gear we settled down for a pint in the sunshine. Sure enough, the bass player arrived next. His nickname needs a line to itself, as it's quite hard to imagine it casually dropped in a sentence somewhere: 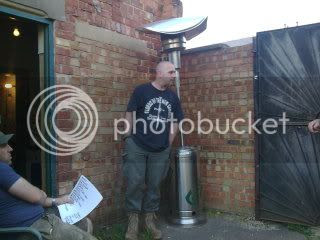 After berating me briefly for my recent ironic choices in headwear (flat cap and aviators are not such a good look, it turns out!), we were joined by Nicko "I came on Eileen" McBrain Jnr. Nicko's lovely mum Linda had brought a chaperone in the form of young Jack, a fine upstanding young lad in a rather striking checked shirt. After chatting for a bit we began to haul the noisy things from the back of the van. It's at times like this that I feel for poor Mister Swift, who has to load all this in the van by himself in Hull before setting off to a gig. In no time at all we were set up and ready to go. Big Ginger (forgotten his name again!!) the sound man is a diamond, letting us play as loud as we want (well, as loud as Mr Dugginson will let us!) and even recording the show for us on minidisc, the fruits of which will be spotted throughout this diary in what I hope will become a regular feature. (Note to Swifty - don't lose yer minidisc recorder!) 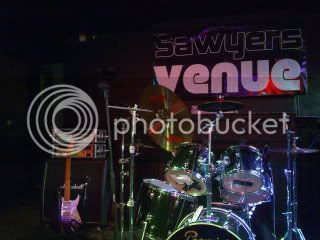 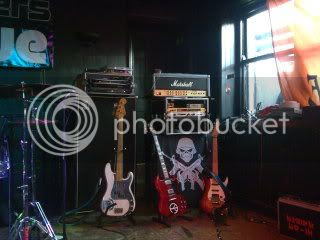 As much as we love playing these songs, we do need to change it up every now and then and try some songs we haven't done for a long time (or at all). This week's candidate was the climactic Only The Good Die Young from Maiden's seventh studio effort. I had completely forgotten to learn this, but managed to get my fingers round it perfectly well on first go save the solo at the end, which required a quick listen on the ol' iPod. There's a particularly tricky run of notes in Swifty's solo which I must give props to him for pulling off.

It's been quite a while since the last gig. I had spent most of the journey with the strange feeling that I'd left something behind. Maybe I'd forgotten to lock the front door or left the iron on. Then, while loading the Marshall cabs in, it hit me. I'd only gone and left me wig at home! "Oh, bother" you might think. To be perfectly honest, I wasn't that worried. Knowing that a heatwave gig in a packed pub can cause physical problems at the best of times, I knew I'd be much happier without any headgear on this particular evening. There just so happened to be a 'general store' over the road which had, bizarrely, a number of wigs in the window! Lucky for me, it was shut... 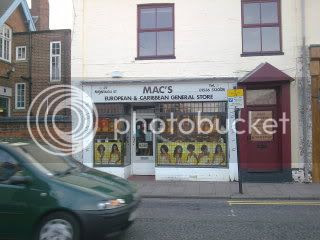 After a few rehearsal songs in soundcheck we naffed off for a bite to eat. I was amazed at how tight we were after the two month break between gigs. On the train on the way in, I'd listened to a spot of Maiden and to be honest I wasn't that up for playing it. Of late I've been somewhat musically overworked! However as soon as we launched into 2 Minutes To Midnight in soundcheck I instantly remembered why I love this band so much. There's a unique chemistry to this band now that there never was in the past - we're so much more than the sum of the parts these days. Magic! 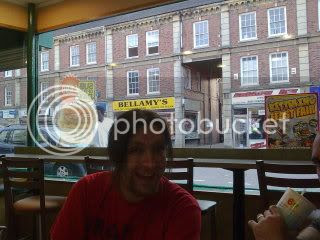 Moseying back to the venue I did a quick string change on my back-up guitar and got ready to go on. I will admit it felt a little bit weird out onstage without the wig on in this band, but oddly liberating at the same time - I didn't feel nearly as much of a prat as I normally do! The gig was a blinder, despite the sweltering heat we soldiered on. As Big Ginger rightfully pointed out, the LED changer lights were much more welcome than scorching PAR cans would have been! Only The Good... went down well, as did Flash Of The Blade. It's nice to do some slightly more unusual ones that Maiden don't play live, and those songs were definitely highlights for me. Duggers was having a bit of a microphone issue - the man's voice keeps killing his wireless mic! Some sort of deal ought to be made with Shure, methinks - "Build me an indestructible microphone!". Might have to have a word at Music Live in November... Eddie "want me Tina Turner wig?" The 'Ead made an appearance, which is always welcome. Old 'Ed decided to loan me his wig, which caused much hilarity onstage - the words Rod and Stewart were mentioned!

With Sawyers suitably rocked to the core, we went and wrung ourselves out in the changing room. My gig clothes are still not dry, and it's now two days later! An absolutely cracking gig, with some familiar faces in the crowd (lovely to see Kay, John, Carmel and Jason!). After some generously provided beers we carted the gear off and said goodbye to Messrs Harris and McBrain who went off to their respective homesteads, while Swifty, Duggers and I retired to the nearest Travelodge. The next morning we checked out the recording, blew off extensively in the hotel room and enjoyed a Little Chef brekkie. Top hole.

Brilliant to be back at it. Two more gigs this month, August off for holidays then back with a vengeance in September to ride out the year with several trips abroad (and even up north!). Until next time...

Posted by Christopher James Harrison at 10:17 pm No comments: