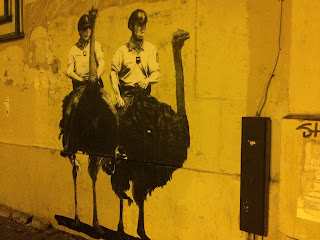 The Need were off to Paris!  It was the most local of our gigs so far, and it was rather nice not to have to negotiate an early start at the airport.  I reached St. Pancras International at a relatively palatable 10:00 a.m., happy not to be lugging a heavy flight case around with me.  A flight-case is a must for flying with instruments; train travel is a different matter.  My trusty Juno-DI was in its lovely, soft, cushioned gig bag along with all its cables and pedals and such.  Hooray. 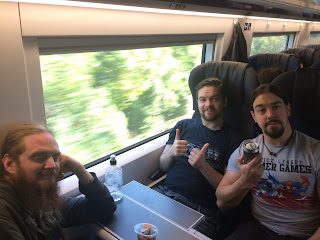 The train was going so fast, the outside looked like broccoli in a blender.

I met Tom “the toilet isn’t in the right place” Sullivan in the Eurostar ticket hall, closely followed by the other two reprobates.  I needed a coffee, and Rich “I was basically his poon squire” Pecks needed a ‘sit down’.  I’d finished my disappointing coffee, complaining that they’d put steamed frothy fail-milk in it against my wishes.  Pecks had a complaint of his own; there had apparently been no lock on the cubicle door (“By the time the third person tried to come in, I just let ‘em have it!”).

The train pulled out of the station for the 2 1/4 hour journey to Gare Du Nord.  The boys spent most of the journey talking about taxes and accountants; I spent most of it drinking Sauvignon blanc.  Pecks told me that he’d read my Sweden gig diary, and that he and his good lady had very much enjoyed the tale of the Great Stockholm Banana Bomb.  However, it did give him something of a personal revelation; he realised that he’d basically done the same thing in Munich.  Apparently, at half-time, he had gotten over-excited and chucked a banana out the window of the dressing room!  Something about the interval in this particular show seems to make him want to lob fruit about.  We’re going to have to start locking it all down. 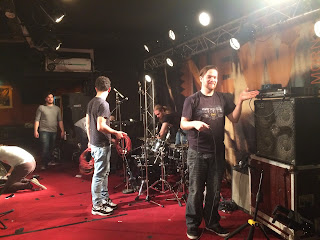 Upon arrival in Paris, we found our way to the Best Western Aulivia Opera hotel which was located on a quiet side-street not far from the Boulevard de Magenta.  We didn’t have far to go to the venue; it was across the road and along a bit (“You go right straight through this door here, down the hall.......turn right...…and then there's a little jog there, about thirty feet…”).  The New Morning club was a nice-sized room, which we quickly learned had sold out.  Ali “Boys, where’s the tequila?” Azimi arrived shortly after us, and we set about sound-checking.  Sound-check was a little bit difficult; the relatively small stage made it a tough job to balance the backline with the monitors, and it was going to be difficult for anyone to hear their vocals.  We made the best of it, though, and after getting our sound right we brought on our guest artists to play along with us and make sure they were happy on-stage.  We were to be joined by a whole host of guests for the last two songs of the night.  We were joined by members of the fantastic Manushan: Aida, Babak, and Habib (I really hope I'm getting names right here!), the latter of which provided some percussion on the album’s opening track.  We also had a small choir along for the ride! Very exciting, but lots of bodies on a small stage! 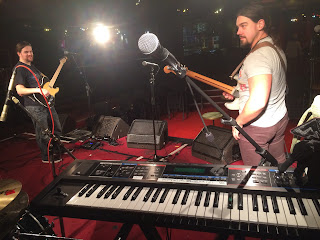 The view from keyboard world.

Between sound-check and gig, Sully and Pecks high-tailed it back to the hotel while myself and Tom “please make ‘poon squire’ his nickname in the diary” Atherton chilled backstage.  We did try to get outside for some scram, but the sold-out crowd on their way in made that nigh-on impossible, so we had to beg the other two to bring us some food back!  Bless them, they came back with pizza for us.  Poor Athers had a bit of a tooth-ache, which we attempted to resolve with whisky and dessert wine.  I don’t think it helped…  There were lots of people backstage in a relatively small space, which made getting dressed for the gig interesting, although not as interesting as the improvised toilet facilities… ugh!  The walls were adorned with posters of past acts who had graced the stage, and these were not to be sniffed at - Nina Simone and Buddy Guy had both taken the stage here in the 80s, and Herbie Hancock had been here more recently.  Pecks was particularly excited about jazz guitar great John Scofield playing there a few days after us! 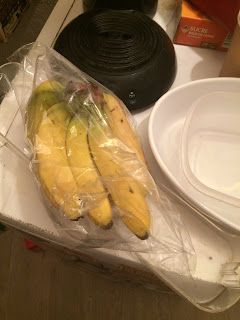 Bananas.  In a Pecks-proof wrapper.

The gig itself got off to a bit of a shaky start.  I think Ali was still struggling to hear himself singing, which is always a bit of a bugger, and there were a few mis-steps in the first couple of numbers.  It recovered nicely after that though.  I didn’t have the best first half, much like in Stockholm, but pulled it back for the second set.  I particularly enjoyed Enteghad (Complaint), which is a simple piano & vocal track at the beginning of the second half of the show. It’s always nice, but this time there was something a bit magic about it.  From then on, the band were on fire.  The crowd were with us the whole way, which carried us through the slightly ropey start and on to the triumphant end.  I write this having just seen a bit of video from the final song of the evening, and it’s HUGE.  Both Pecks and guest vocalist Aida were simply tearing it up.  Amazing. 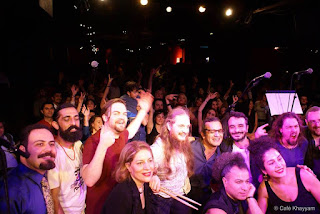 Just a few of us onstage, then!

We knew we had to get up for a ludicrously (well, 7:13 a.m.) early Eurostar back to London.  That, of course, didn’t stop us from getting on the need.  We found ourselves in Le Napoléon, a charming little bar at the end of the street, where we found a number of the audience and, later, all our fabulous guest musicians!  I got to meet Mohsen Namjoo, the featured guest vocalist on the studio version of set-closer Farda Soraghe Man Bia (Find Me Tomorrow), who was lovely and very generous with his praise for us.  The bar closed at 2am, but we weren’t done yet; I had been informed by the receptionist when checking into the hotel that, and I quote, “The bar never closes!”.  That turned out to be a bit of a lie - I’m pretty sure we were ejected from the bar about an hour later. 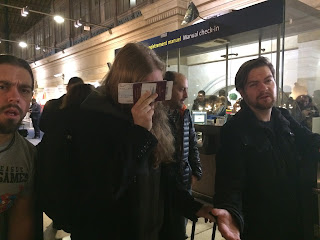 Papped in the passport queue!

There barely seemed any point going to bed, but I did and managed to sleep through my alarm.  It took a banging on the wall from Pecks and Sully in the adjoining room to rouse me from my slumber.  We zombie-walked our way back to Gare Du Nord and through passport control to board the train.  I couldn’t sleep on the train, unlike the rest of the boys, but enjoyed watching the sun rise over northern France as we raced towards the mouth of the ‘Chunnel’. 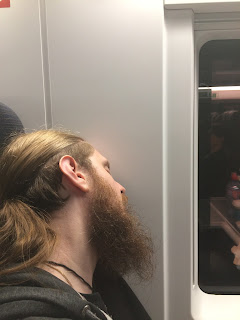 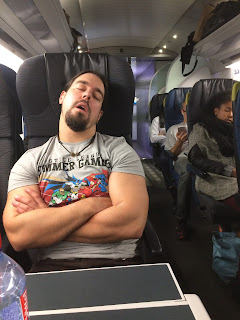 Dreaming of the gym 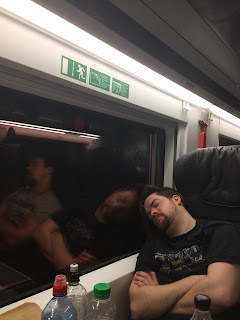 Dreaming of the perfect venue crapper

20 minutes of pitch-black tunnel sous la Manche and we were back in Blighty.  The boys went onward, while I decided to hide from the morning rush hour in a cafe near Kings Cross and have breakfast before heading back home.

That’s pretty much the European tour over!  We do have a gig in the book for Barcelona in December, and a London date to be announced any day now, but the next you hear from me will be after (or maybe during) our tour of the U.S. and Canada.  I’m freaking excited!