I always thought Bishop’s Stortford ought to be a type of cheese.

(Forgive the slightly strange opening to this one.  I’ve never known how to start these things - Ed)

I’ve never known how to start these things.

(You said that already - Ed)

The Ali Azimi & The Need European tour was due to start in Köln, and it was a rather early flight from Stansted.  Tom “raised by a pack of wild guide dogs” Sullivan and I had decided to book ourselves into cheap airport digs to avoid a stomach-churning early morning.  After work, I jumped in the DadTaxi (thanks, Dad!) and arrived at Bishop’s Stortford services somewhere between 8:30 and 9pm, sidling up to the hotel bar to find Sully gently nursing a beer.  Against our better judgement, a certain amount of need was consumed before trundling off to our slightly dingy room at the very arse-end of the Days Inn.  I didn’t know they still had smoking rooms in hotels; the smell reminded me of JBs in Dudley before the smoking ban came in.  Similar to that former bastion of Midlands rock, I suspected that the pong from years of fag smoke was hiding a multitude of nastier olfactory assaults, although admittedly there was no river of wee running out from the toilet door. 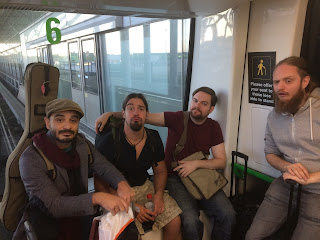 Sully used that Uber thing in the morning to get us to the airport.  So much for geo-location or whatever its called - the useless sod of a driver couldn’t find us!  We met the rest of the band (sans Ali “which one is the pink sausage?” Azimi, who was running a tad late), got our stuff checked in and got through security for a quick breakfast.  Ali caught up with us, presenting a bottle of Scotch he’d bought for the trip.  We made it to the plane, only to find that those lovely people at Ryan Air wouldn’t let Ali on board with his guitar without a fight.  This delayed him for quite some time - he ended up, essentially, having to buy a seat for it!  I honestly don’t think he’s happy unless he’s the very last one on the plane… 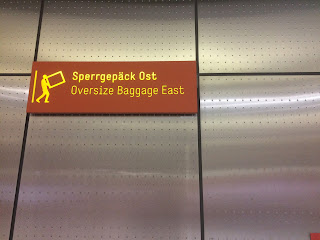 The flight was quick and uneventful, and Köln airport must have been fairly unremarkable as I don’t remember a thing about it.  We jumped on the clean, half-empty train that left bang on time (imagine that!), and arrived in the centre of the old town shortly thereafter.  Rich “too rock and roll for his own pants” Pecks and Sully went off for a nap while the rest of us went in search of beer and sausage, as of course is tradition.  The ancient, Gothic cathedral we passed on the way was quite a sight.  Curry wurst was the order of the day, washed down with teeny tiny glasses of pilsner that didn’t stop coming.  Lovely.  After a short spell of kicking around in the hotel, it was time to naff off for sound check. 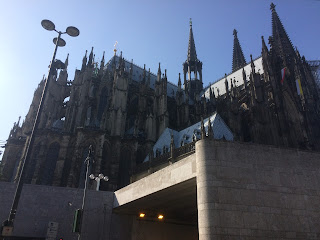 The Altes Pfandhaus felt like a quiet TV studio or jazz club, and I think we were all a bit worried about our show being too beefy for such a soft, calm room.  We needn’t have worried, as is so often the case.  The space was lovely; audience on three sides, with a long floor space to use.  We sound-checked, and Ali was interviewed by local TV until doors opened.  We nipped backstage for a quick bite to eat before rolling the intro tape.

The show was really good fun.  The house was packed, and there were clearly some big fans in the house; to my left I saw a few really enthusiastic chaps belting out practically every word.  We split the set in two with an interval.  The first half of the show is a little more serene than the second, which felt all the more serene with a seated audience.  However, once Ali and Sully got the audience on their feet for one of the Radio Tehran songs, the crowd really came alive.  There was a great feeling in the room after the show; I’ve never had so many photos taken with punters, and it was a rather odd feeling to be signing copies of an album I wasn’t on.  I’ll have to ask ‘Naughty’ Josh Trotter for a sample of his autograph. 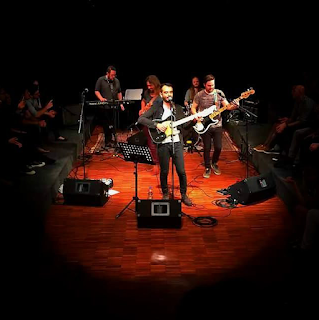 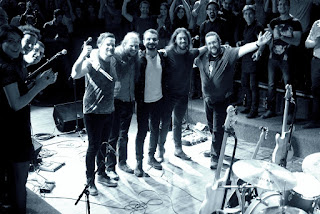 Ali was whisked off to a nightclub for an after-party, while his wonderful pal Derek helped the rest of us find a cab.  After arriving at the hotel, Sully decided he needed sleep and the rest of us decided we didn’t fancy a club, so me, Pecks, and Tom “eeeeeeeebah!” Atherton went back to the scene of lunchtime need for more pilsner that didn’t stop coming.  It’s always nice when someone just brings you beer, isn’t it?  I think we’d racked up 20 between us before calling it a night.  It was nice to spend some time getting to know Pecks. I’ve played music with Athers and Sully for years, so know them reasonably well; but, apart from (I think) one Carpathia rehearsal many moons ago, this is my first time making notes with the Romford He-Man himself.  He plays circles around basically every guitarist I’ve ever known, and is an absolute joy to be on the firm with.  He’s also very fond of a German döner kebab! 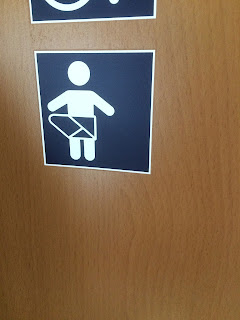 Amazingly, we didn’t miss our morning train.  Perhaps we would have been better off waiting for the next one, though.  The first thing that went wrong was that the on-board coffee was utter dog water.  Then the train stopped still for 15 minutes.  Then it pulled forward about six inches.  Then it stopped for another 20 minutes.  The rear half of the train was apparently the problem.  By this point we had already missed our connection at Mannheim, but there was very little we could do about it.  Eventually the train got moving again, and we were all turfed off the back carriages at the next station to pile on to the front half.  This train stopped at plenty of airports, and practically everyone on board had luggage (or children) with them.  At one point we had to pile everything into the disabled bogs, which was one way of getting a seat as demonstrated by Sully… 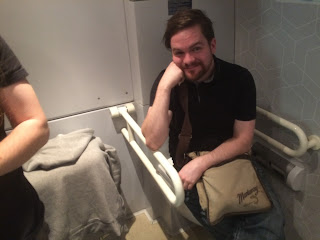 "It's got a button that washes my trousers!"

We eventually arrived into Mannheim around an hour late, and managed to get on a train to München without too much drama (except for Ali disappearing unannounced, only to arrive with cheeseburgers for everyone just as the train appeared! Lovely man).  When we did finally find some seats we met some fine folks - Canadian Don from Edmonton and his lovely wife (whose name escapes me as a write this), and a fellow at our table who was writing an engineering textbook.  He was a clever one, taking time to chat to us about what he was doing, and to lament Brexit with us.  We pulled into München and piled into a cab to the Holiday Inn.  We didn’t have long in the room before we had to leave, and I enjoyed a cheeky stein while waiting for the lobby call. 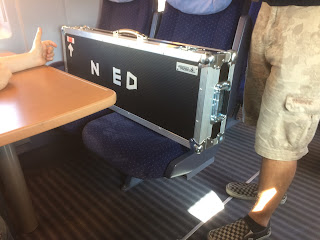 Ali Azimi and the Ned

I felt right at home in the Feierwerk, which was more or less your typical black-painted bar-at-the-back rock club.  Fu Manchu and Less Than Jake coming soon, loads of old battered gear that didn’t quite work but did if you beat them hard enough, that kind of place.  We had a fairly lengthy sound-check trying to get rid of this bit of feedback, that bit of feedback, and the other bit of feedback.  I’m not sure if EQ-ing monitor wedges is a thing, but the wedges at Feierwerk could do with a bit of it if it is!  The guitar amps gave Pecks a bit of a headache, but the bass amp was rather lovely (not that I was getting any in my monitor...harrumph!). We got it all reasonably comfortable on stage and headed to the green room for a vocal warm-up while Ali broke out the Scotch. 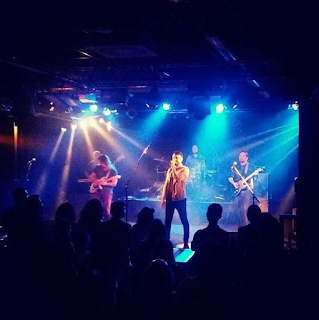 The gig was great.  I think we’re all playing slightly better each time, and the punters were electric.  We even got called out for a second encore, which was amusing as we had basically run out of rehearsed songs!  A repeat of ‘Pishdaramad’, with a bit of extra d*cking around, went down a treat.  We left the venue, with a couple of band members already in moderate states of refreshment, and were taken out to a Greek* restaurant which the promoter had arranged to stay open late for us.  Lovely!  I was disappointed not to find spetsofai on the menu (a favourite from my trip to Rhodes with Hi-on Maiden), so settled for the stifado and some vino.  Top notch.   We piled back to the hotel bar for more need before kipping down for the night.  I ended up putting a near-paralytic Pecks to bed, before joining Atherton and Ali for some more of that rather tasty Scotch. 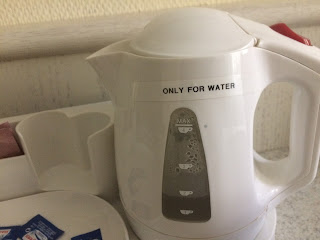 I shudder to think what else they think I want to boil...

Poor Atherton didn’t look too good in the morning.  I was absolutely fine until I decided that a pre-check-out beer was the way to go.   The less said about the result, the better!  We met in the lobby to find Ali desperately trying to re-arrange a coach he’d booked to take us to Nuremberg airport - he’d forgotten to tell us when the coach was, and subsequently we had missed it.  Whoops!  While we were trying to decide what to do about our onward travel plans, Sully was delighted to regale us with an early morning tale. He’d been woken up by a knocking sound at about half-past five in the morning, and opened his hotel room door to find Pecks, in a state of some undress and apparently sleep-walking, knocking on random doors out in the corridor! 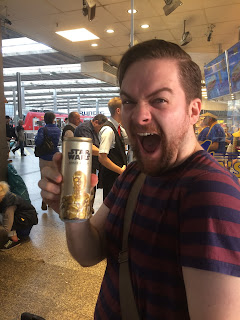 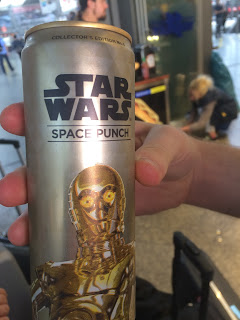 It cost a pretty penny, but we made our way to Nuremberg airport by train and underground.  The flight was briefly delayed, but all in all we were only about an hour late touching down in London before going our separate ways. 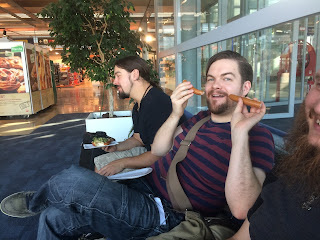 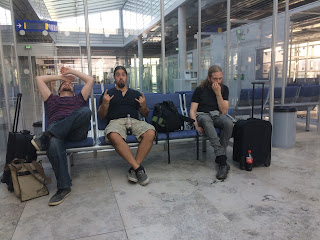 Once agin, an absolute pleasure of a weekend away.  Thanks to my fellow Needsters, and the good people of Germany.  Prost! 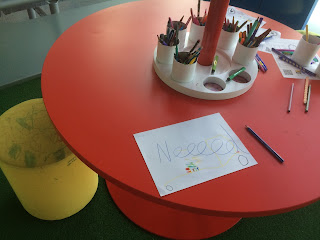 Christopher “Come and have a bar in the beer with me!” Harrison

*It might have been a Turkish restaurant.  I can't remember.  Whatever it was, it was delicious and wonderful!