After a mad couple of weeks at work, I was very grateful to have had the Friday off.  I spent most of the day dozing in front of the TV until it was time to leave for the airport hotel.  The CoreyTaxi(tm) dropped me off at the Stansted Airport Premier Inn a little later than advertised, after we took something of a waspie; in my infinite wisdom, I had mistakenly directed us back onto the motorway, which resulted in us having to go 13 miles to the next junction just to come straight back.  Whoops!  If my Hi-on Maiden gig diaries prove anything, it’s that I should never be left in charge of navigation!

On arrival, I found Tom “E666 - the flavouring of the beast” Sullivan waiting outside.  He’d booked a table in the restaurant, bless him, so we went straight for dinner and some delicious need.  Sully reminisced about the band's previous trip to Sweden, while we tried to ignore the drunken Scotsmen a few tables away; they were friendly enough, but enormously loud.  To the extent that the Police were called!  After a few more glasses of vino collapso, we headed for bed. 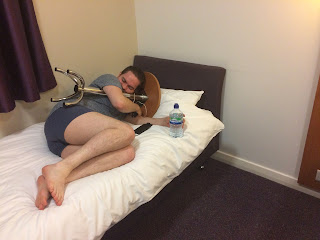 "It's MY bedside table!"

Upon rising, we quickly discovered that getting to the airport via taxi was not an option - the journey was too short, so cab drivers either charge a small fortune for a ten minute journey, or balk at the idea altogether.  Thankfully, the hotel was served by a cheap shuttle bus, so off we went (after Sully spotted a mouse running about in the corridor - we’d better tell them about that!).  We arrived at the airport to find that Ali “sort your attitude out!” Azimi had beaten us to the airport!  He seemed very anxious and upset at the idea of being early; the polar opposite of the rest of us, who hate the idea of being late!  I picked up some duty free, reasoning that Swedish need was going to be rather expensive, and I’d be better off taking my own.  Ali had the same idea, and bought a bottle of Patron for the band.  I’m not the world’s biggest tequila fan, so I procured some whisky and Jaegermeister.  Lovely job. 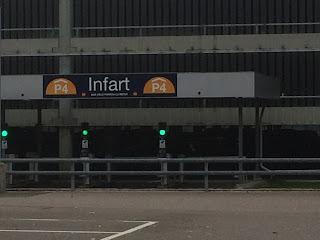 Infart.  Not what you want.

On our way to the gate I spotted our drunken Scottish friends heading for Bratislava on what had to have been a stag do.  Good luck, Slovakia!  Getting on board was a bit of a clusterf***, as one has come to expect from RyanAir; loads of flights had been called at the same time, and the very small arse-end-of-the-airport waiting area we were sent to was heaving with passengers.  The queuing was very disorganised - terribly un-British.

The ‘plane ride was relatively eventful.  The stranger to my right felt moved to turn around to the folks in the seats behind us and ask them to stop kicking his seat.  About 20 minutes later, Rich “sometimes I forget I’m naked” Pecks had the same issue, which was swiftly dealt with.  I’d love to say he Hulk-ed out on them, but sadly it was all very polite and reasonable.  More notable was our dearest Ali, who decided to get up out of his seat to muck about in the over-head locker just as the plane was about to start down the runway!  The head steward on the PA system didn’t sound particularly amused.  We all got some dirty looks from our fellow passengers, and as I got off the plane I got told off by the stewardess for Ali’s behaviour!  I must have had ’Responsible Adult’ written on my forehead… 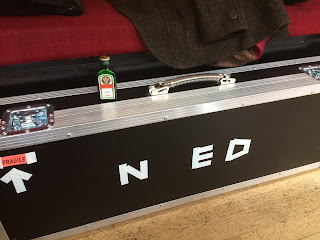 We were met at Göteborg Airport by Sahar and a large, friendly welcoming party who had come along to drive us around.  We had opted to go straight to the venue for a sound-check before heading to the hotel for an afternoon nap.  The promoters had initially booked a large, seated theatre, but had taken the last-minute decision to move to a standing venue.  Both myself and Tom “Ray Winstone’s Geezer Histories” Atherton felt right at home at the Cajsa Warg sports bar; we’ve both spent most of our performing lives in rock bands playing in the corners of pubs and clubs.  It was a small stage, so there wouldn’t be much room for manoeuvre, but we knew it would be good night if the crowd was up for it. 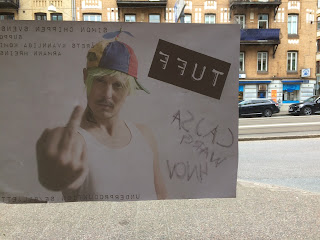 Same to you, pal!

After sound-check, we headed to the STF Göteborg City hotel, which was very comfy and well appointed, although I got the impression it must have been student digs at one point.  The muzak gently wafting down the corridors at all hours was a bit strange, and the room itself made me think of a sleeper carriage on a train.  True to Köln form, Pecks and Sully got their heads down while the remaining three of us went out to lunch.  We found John Scott’s Pub a short walk from the hotel and scoffed some lunch, washed down with a beer or two (why do other countries always feel the need to put the word ‘Pub’ after the name they’ve chosen for it? Answers on a postcard).  I had a lay down and a shower before getting ready to leave for the gig.  There was no dressing room at the bar, so we had all opted to get into our stage gear before leaving the hotel. 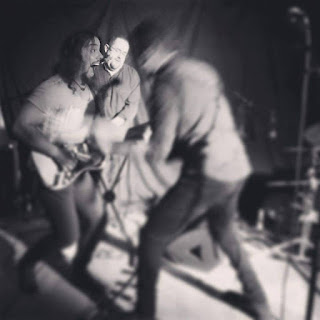 Rocking out in the Time Vortex...

The gig itself was fantastic.  The crowd were completely and utterly with us.  ‘Donya Jaye Gozare’ (or ‘Cousin Song’, as we informally refer to it) was a particular highlight for me - it was just beautiful and, according to Athers, caused a few tears in the audience.  I worked the opening riff of The Hit Single into a piano solo at the start of the second set, which caused a deafening roar from the crowd; I’ll be keeping that little trick I think!  Before ‘Cheated’, Pecks had a quick word with the audience about the recent ‘Brexit’ vote and reminded them that nearly half of the country wanted to stay in the EU with them. The audience seemed to get where we were coming from and showed their support.  As I understand it, Sweden are more up for remaining part of the EU than ever before following our vote, so hopefully my country’s sickening display of nationalism has had at least some positive effect in other places.  “Hey you! Don’t tell me there’s no hope at all. Together we stand, divided we fall.” 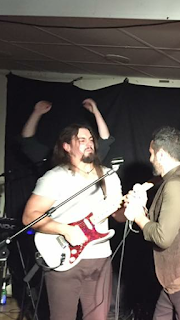 "Up The Arse Corner, with Ali Azimi & The Need"

We hung around for some beers at the venue, chatting to the incredibly cool and friendly punters, before heading back to the hotel.  The lovely English chap behind the desk pointed us in the direction of a fine kebab for dinner, which was swiftly consumed before bed.  It was going to be an early morning!

I was up at 7am having not really got my head down till 2am, so was feeling less than fresh.  I jumped in the shower, and headed down for breakfast.  My personal diary suggests that I was very excited about the buffet breakfast: it simply reads, “Meatballs for breakfast!!!!!!!!!!!!!!!”.   The coffee was excellent too. 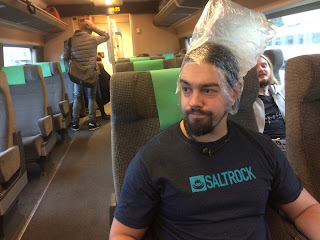 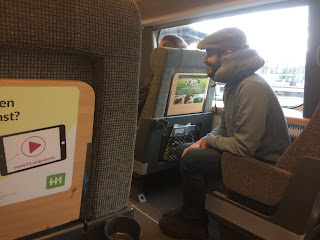 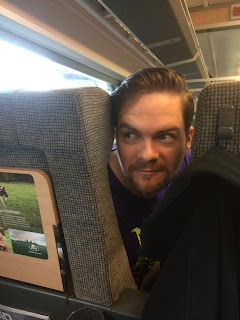 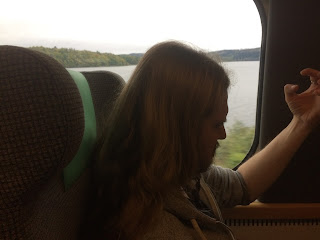 We boarded the train to travel the 300+ miles to Stockholm, with Atherton rocking an Opeth t-shirt in honour of our favourite Swedish prog-death-metal-ish-ers.  I genuinely love train travel.  It’s a smashing way to see a country.  Sweden was delightfully flat, autumnal, and lake-y.  Free coffee and breakfast came round, which was lovely but strange - an egg, rye bread, a piece of cheese, some yogurt, a mint chocolate, and a tube of… cod roe.  !

We arrived into Stockholm and cabbed it to the Scandic Malmen hotel.  A couple of the organising folks were there to meet us, so we shot a short video for them to post to the inter-webs as some last-minute promo.  In short order two of our rooms were ready, so Atherton and I left the other three to nap while we went for a wander and a coffee.  I was fading fast, and probably wasn’t fantastic company, so we soon headed back to the hotel praying that a room was ready for us.  It was, and we both got our heads down for a couple of hours. 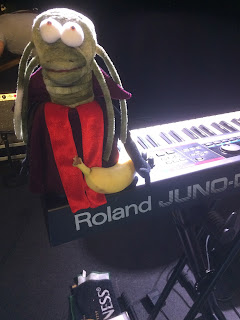 Was this *THE* banana?

The venue was only a short walk away, although somehow we managed to let ourselves be led on a magical mystery tour of the backstreets of Stockholm carrying all our gear - not fun!  The Södra Teatern looked ace - a nice, big club room with an ace lighting rig, a hench P.A. and sound guys who really knew their job.  The sound on-stage was practically perfect straight away, bar the usual “Can I have a bit more of this in my monitor please”.  The sandwiches backstage were less practically perfect for poor Atherton, who had a rather violent reaction to the cream cheese in his chicken sandwich!  I thought I was a cheese wimp. 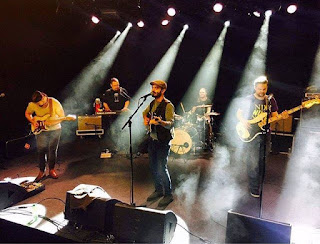 The show looked and sounded absolutely fantastic, if the videos we’ve seen are anything to go by.  From our standpoint, the crowd were a little reserved during the first half.  The second half was a totally different story - I think Ali and Pecks managed to bully them into rocking out with us.  No second encore this evening, but a fine end to the show nonetheless. 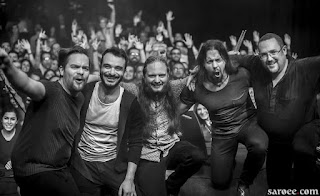 I got backstage to find that my beloved Marillion fleece-y thing had been covered in some foul-smelling yellow goo.  I must admit I got in a rather embarrassing rage about this, thinking a total stranger had been in our green room during the gig (not outside the realms of possibility - every time I went in there, there was someone I didn’t know or recognise in there).   Pecks arrived in the room and asked me if I was alright, to which I responded, “No, I’m not alright, some c*** has covered my hoodie in vom!”  He rather sheepishly admitted it had been him!  Pecks had apparently had a bit of a He-Man moment and thrown a banana at the wall, which then simply disintegrated and covered the table below - including my warm winter garment of choice - in deconstructed nana.  I immediately found the entire situation hilarious, but promised to get him back one day.  He’ll never see that banana coming…

Sully wasn’t feeling particularly well, so made his excuses and naffed off to bed.  After getting the gear back to the hotel, the rest of us went out to the reasonably close Indigo bar for some neeeeeeeeed.  I managed to polish off the best part of a bottle of wine before deciding to call it a night myself; I was running on fumes by this point.  Several nights in a row of poor sleep had started to take their toll.  I committed to book the airport taxi when I got back to the hotel, and said goodnight. 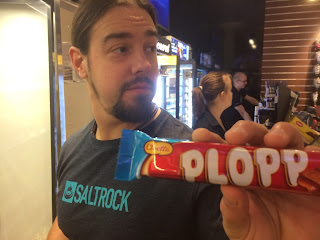 I vaguely recall Atherton stumbling in about an hour after me, but I was pretty much out of it until the alarm went off.  I went for breakfast (no meatballs this morning - boo!), and noticed more huge tubes of fish paste.  Not my choice of spread!  We piled into the waiting taxi and made it to the airport in plenty of time to get some Plopp in, managing to fly back to London without event.

I bloody love Sweden!  Paris next.

Christopher “Ziltoid made me do it” Harrison

Posted by Christopher James Harrison at 1:05 am