The last leg!  This is a bit short, really; I think I must have been suffering from 'need-lag' by this point on the tour, and my notes became a little bit thin (which I most certainly didn't...!).

Thursday 10 November (Day off, Toronto, ON) 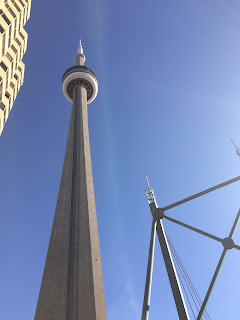 Pecks went to the gym.  Sully took me up the CN Tower (ooh err).  It was amazing.  Atherton checked out the nearby Steam Whistle brewery.  We met up with Pecks and went looking for poutine, which we found in the form of Smoke’s on Queen Street.  Hair metal on the radio, carbs in the cardboard.   Beautiful. 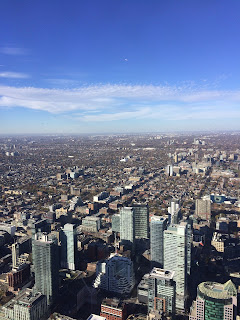 We checked out Steve’s music store, which had been very kind and helpful to Sully on a previous trip when he had a mid-tour effects-pedal malfunction.  I found a nice Tele which I briefly considered buying, but thought better of it.

I woke up to the news that Leonard Cohen had passed away.  Everyone but me slept in, so I had a quiet pot of coffee to myself in the kitchen overlooking the beautiful garden with its carpet of red-brown-yellow leaf.  Sully was the first to surface, and promptly went out for a wander.  I stayed behind trying to operate the Nespresso machine, with limited success and a lot of mess.  I gave up in the end, and went back to bed!  After a very slow morning/early afternoon while everyone gathered themselves together, it was time to head to the venue. 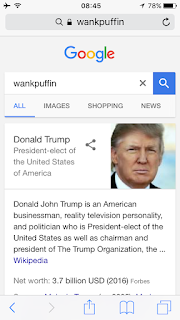 It was cold!  After having spent most of our time on this continent basking in 25-30 degree heat in Los Angeles, the 0-5 degrees of Toronto was rather refreshing, although no-one wanted to stay outside too long.  We loaded the gear in to the Mod Club and set up for one of the easiest sound-checks of the tour.  Once set up I found my way to the bogs and started humming ‘Marble Zone’ from Sonic The Hedgehog to myself – it’s always slightly unnerving when you hear someone humming along with you in the gents!  Thankfully it was only Sully.  Atherton and I went over the road for a cup of coffee and a sarnie, returning to find ALL THE PIZZA IN THE WORLD had been delivered. Nice!

Rhythm & Vibes opened the show, and were on top form.  It was really lovely to see all these guys again; I’d met them for the first time in Calgary earlier in the year, and had fond memories of their show and their company.  They got the crowd going in their own inimitable fashion, and then it was our turn.   The show was a really enjoyable one, with a couple of really special moments.  An old Radio Tehran song, ‘Eshtebah’, sticks in my head from this night. Its quite Floyd-y in a way; I get to play some pretty easy yet atmospheric organ chords, accompanying some quite impassioned vocals from Ali and some lovely slide guitar work from Pecks. On nights like this one, when the band is on fire, when the atmosphere in the crowd is electric and the lights are right, its like a warm hug.

We had also decided to do the obvious tribute to Mr. Cohen at the start of the second set, and I got to sing the first verse – the crowd singing every word along with me.  I was reduced to a sobbing wreck after that and had to leave the stage briefly to recover myself (despite Sully’s hilarious but perhaps inappropriate altered lyric – “She tied you to her kitchen chair, she slapped you ‘round, she touched you…there…”).  Also during the second half, a young man brought his young lady-friend onstage to propose during the middle of ‘Wedding Song’, appropriately enough.  Thankfully, she said yes.  We didn’t have any suitable music prepared for the eventuality that she said no!

After packing down, lovely Aiden and Sara drove me back to base with all the gear, and then we all headed for Siavash’s apartment where the party was already in swing.  “Lots of love in the room”, says my personal diary.  I think I hit the bottle rather hard; I don’t remember much except that Sully and I got a cab back, which we had to go on a bit of a mission to find! 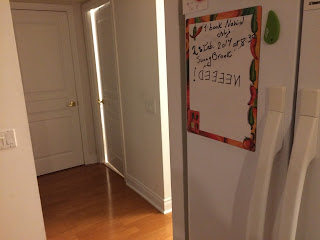 'This is a very boring painting' *

Our host, the splendid Mohamed, woke us all up (bless him) on time for us to get ready to leave for YYZ.   We got to the airport in plenty of time, but it was all for nothing; somehow, despite confirming the booking via email and taking his money, Air Canada had no record of Ali buying our ‘plane tickets.  It took a lot of time and queuing to figure this out, and the nice girl behind the final desk seemed more interested in explaining what had gone wrong - in great detail - rather than making any visible attempt to put things right.  Luckily, there were just enough seats left on the flight, and we were fast-tracked through security.  Ali and Mohamed had stopped off for sandwiches for us en route which were distributed once in our seats (hero!), and I settled in to watch ‘Finding Dory‘ and have a good cry (Altitude Adjusted Lachrymosity Syndrome). 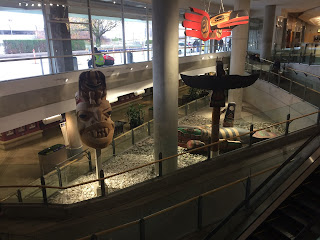 "The ride into Vancouver is going to be choppy...", announced the flight deck.  Shortly followed by "We're going to be landing sooner than we thought..." !!  Not particularly reassuring, but after a turbulent descent we landed safely.  We piled into a cab and headed for the last hotel of the tour (passing ‘Big Rich's Adult Video Store’ en route…).  The hotel was a fair way out of town, so we didn’t have long there before we had to turn back and go to the venue.   I had spied this venue in a Devin Townsend Project video tour diary, across the street from the Vogue Theatre where they were playing back in October.   The guys in the venue looked after us and the sound check was over relatively quickly.  Off to Tim Hortons for a coffee and a sandwich before going straight back to the venue.

The last gig of the tour, and it was an absolute belter.  We had been a bit worried about the curfew (which we were actually told about in advance, for once!), but we timed it perfectly.  The first set was terrific, and we opened the second set with ‘Hallelujah’ again; the sound man wasn’t quite ready for me and Atherton to come out and start, the house music was going for a good 5 minutes with me stood on stage like a lemon waiting to start and gently waving at the back of the room!  Still, never mind.  Another appreciative crowd, another sold-out show.  Hooray!

The after-show / after-tour party began at Earls Test Kitchen.  My notes say “Wasabi minesweeper!” – I can only assume that somebody had something to eat which included some rather surprising heat!  I enjoyed a rather splendid array of white wine before calling it a night around 1am and taking all the gear back to the hotel.  I had done rather too much drinking and not sleeping over this trip; the other boys had sensibly taken days off, but not me.  A lesson learned, but a lesson destined to be ignored I fear.  Atherton rocked in at 4am! 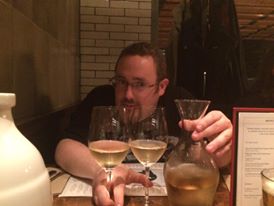 "There must be some mistake; I ordered the LARGE carafe?" 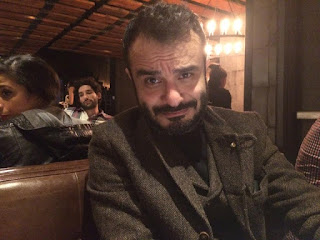 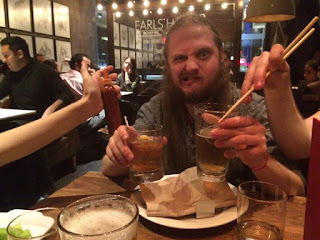 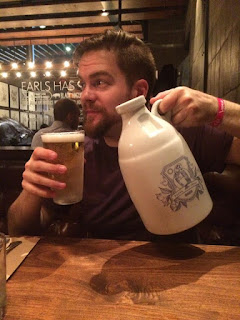 This was the hardest morning.  Definitely.  When I had arrived at the hotel in the small hours, I had asked reception to book a taxi to take us to the airport at around 10am.  Just before 9am, the ‘phone in the room woke me up to tell me that they had only just booked it.  I went back to bed.  Then the ‘phone rang again.  “PISS OFF!!!”, yelled I.  But it was only Ali, inviting me down for breakfast with him, which was very nice!  We enjoyed some lukewarm toast and cereal in paper bowls (definitely the least luxurious breakfast of the tour, unless you count Jack In The Slag), before meeting the boys outside.  Poor Pecks looked worryingly ill (“It feels like my face is falling off”), which is only to be expected – apparently he’d dropped the equivalent of £50 on McDonalds whilst pissed off his face at silly o’clock in the morning!  Bless him.   We said our goodbyes to Ali, who was coming home a bit later, and started the long journey home.

The rest was airports, aeroplanes, and cars!  Oh, and that nifty little tram thing they wheel you around in at Calgary International – that was cool!!!

All that, and I only lost a sock and a ‘phone charger!

I’ve got absolutely no idea how to sign this off, except to say that the two-and-a-half weeks I spent on this tour, and the time I’ve spent with the band on various European jaunts during 2016, count as some of the finest times of my life as a jobbing muso.  I had SUCH a good time, playing to some fabulously warm and generous audiences with some fabulously warm and generous friends on-stage with me.  We got through it all without any major falling out, and I wouldn’t hesitate to do it all again.

To Ali – thanks for having me along for the ride, brother.  You and the boys have built something very special here, and I feel honoured every time I get asked along to play.  Hoping that this means love…
عشق

To Sully – thanks for talking me down off a bad mood in L.A., for making wonderful music, and for being our guide through it.  Washing Bot loves you forever.

To Atherton – thanks for being my most regular and loving room-mate, for not throttling me for snoring too vivaciously, and for being the dirty, hairy, skinny beast that you are.  Don’t you go changing.

To Pecks – thanks for welcoming an (almost) complete stranger into the firm, for making me feel a part of each and every show, and for the sick f***ing guitar jams (almost) every night! NEEEEEED!!!!

To absolutely everyone we met along the way – you were perfect, and you won’t be forgotten in a hurry.