I wrote Part 1 in July. Upon writing Part 2 in August I apologised to myself and the rest of the band for taking so long to get round to it. One Two Three Four Five Six Seven A number of months later...! Right, where were we? 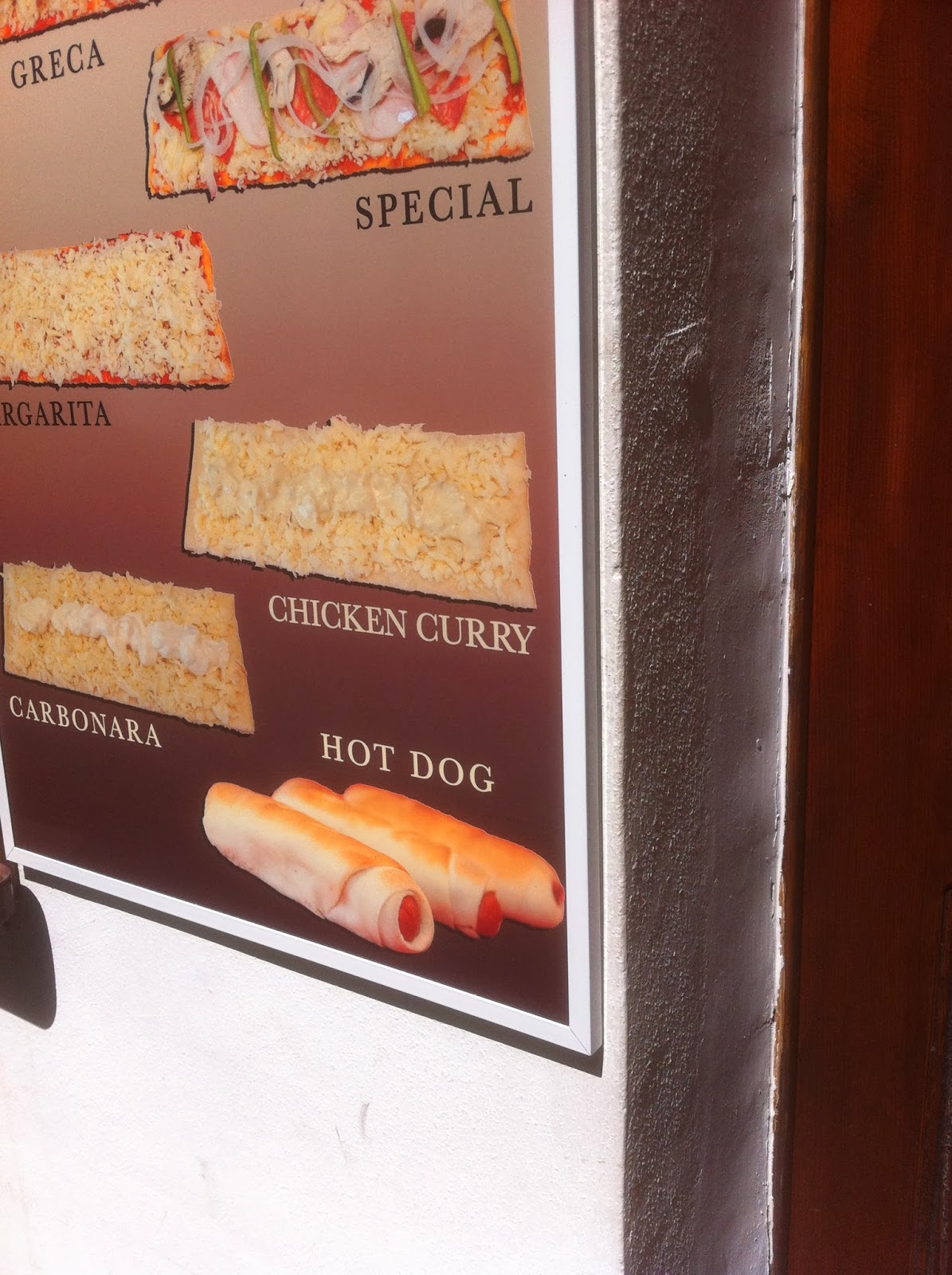 After the previous day's excess, I thought I'd best get up and go. So I got up and went. I had a wander around the village and found myself back in Yanni's for breakfast. I was soon joined by Simon who had his by-now-customary toast and hot chocolate combo while I tucked into pancakes. After a short while putting the world to rights, we meandered back up the hill to Atmosphere where the Sack lads had surfaced. It was gig day for the boys, so they were in for a day of sitting around and waiting for things to happen (that marvellous pastime enjoyed by musicians all around the world). I couldn't quite face a drink at this point, having filled my boots with rather too much fizzy Eurolager during the previous day, so stuck to my bottle of water for a short while.

I retired to my boudoir to play guitar for a little bit, as I had a song to learn and an idea for a guitar solo I would be recording in a friend's studio shortly after my return to Ingerland. After surfacing from that little session I went for a walk with Ozzy, managing to twist my ankle along the way. Just what you want to be doing the day before a big gig! Skills.

Back in town, we bumped in to Simon and made our way to Yannis (surprise). Thus began a long drawn out discussion about the setlist for our gig the following day, which we had to shorten. This went on for some time, and before I knew it, dinnertime was upon us! I took the lads to Agostini's where I enjoyed an absolutely sublime roast lamb, rosemary sauce & halloumi puff pastry delight. It was like angels crying on my tongue. Delicious. Then it was time to go down and check out the main event!

As we arrived in the main arena area, the Bon Jovi tribute were in full swing. The wind was making the sound somewhat problematic, but everyone was having a stellar time. A few beers in and it was time to watch the Sack lads tear it up. Holy sh*t they were good. I've tried writing a paragraph to explain how much I enjoyed that gig, but I simply haven't got the words. It was ace. The inevitable beers followed, with Mr Swift joining me for one before leaving me to jabber at the Sack rhythm section about how good they were. I took myself off to bed before embarrassing myself to much (I hope) to get some kip before our big gig day.

Sunday, the day of the actual gig, started with the usual wander into town where I found Spence The Younger in Yannis having breakfast. I joined him, and after my own meal it was time to get back to Atmosphere to get picked up for soundcheck. Thus began our very own "waiting around" phase. The van, which had been ferrying bands and their gear back and forth from village to arena, had suffered a flat battery the day before. Thankfully this had been repaired, but it did result in soundcheck being a little later than planned. 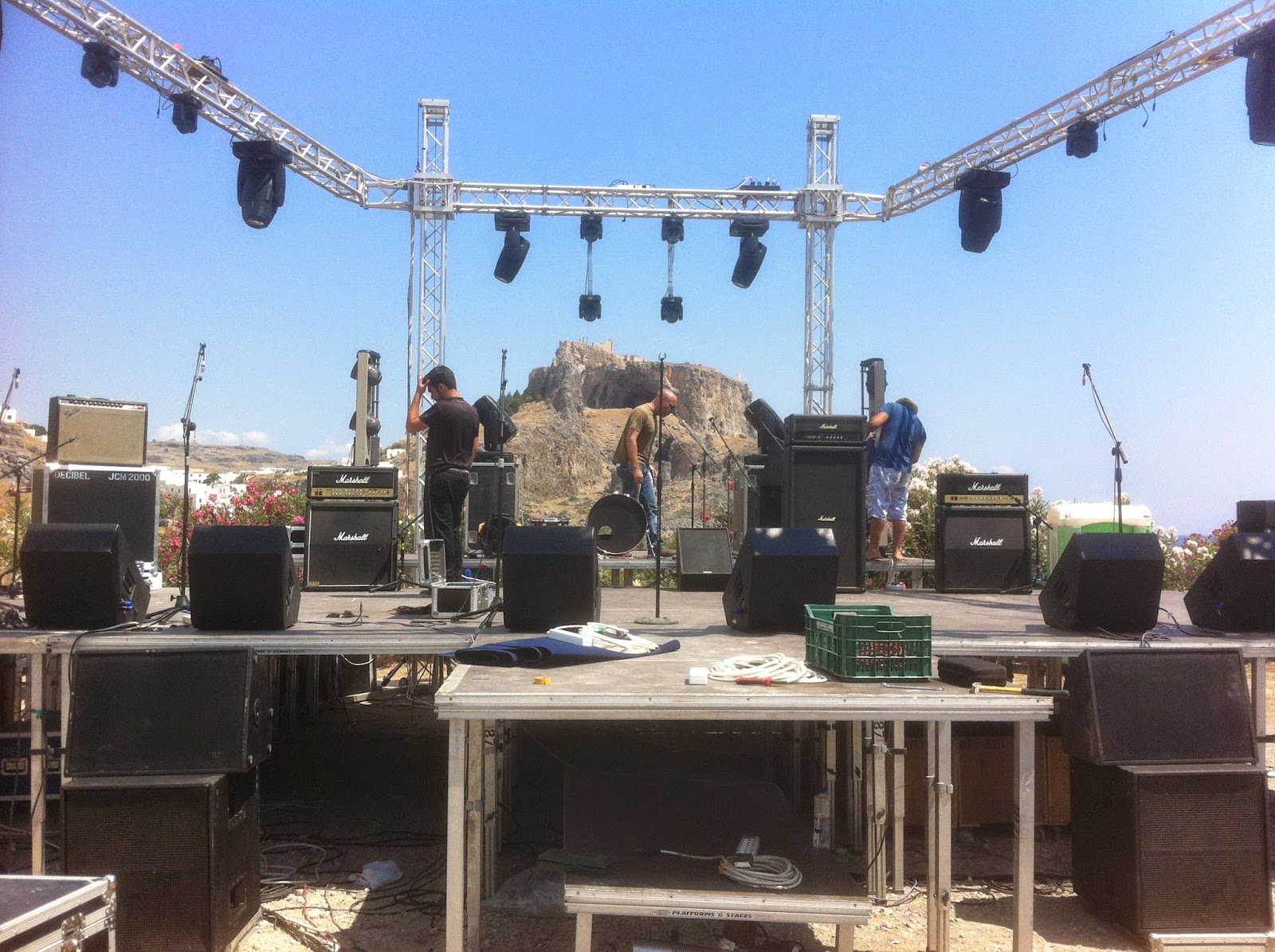 The view could be worse!

Soundcheck was HOT. I was immediately grateful that the sun would be mostly down by the time we hit the stage that evening, as 2 bars into "2 Minutes..." and I was standing in a puddle of my own sweat.  For some reason I couldn't hear the drums, and I was having a bit of an issue with my guitar's input, but by and large everything sounded grand. We ran "Heaven Can Wait", because we hadn't played it for a while, and that was that. I seem to remember the lovely Mr Collyer handing me a beer, which was much needed after the sun had beaten down on me. Then it was back to Yanni's for a spot of lunch (my notes say "Village sausage!" at this point - I think that's best left without explanation or further context!). I had a lovely old chat with Swifty, and we even managed to get a couple of free beers! I went off for a siesta and in no time at all I was de-knotting my wig and getting ready to head down to the arena.

Yes. After all that, we actually did a gig!

As I arrived at the arena, I was warned to stay away from the bushes which were just a few feet from the backstage area. Snakes and scorpions were there in abundance, apparently. Just what you want to hear! Towers of Stone were warming the crowd up nicely, and the sun seemed to go down just as they were coming offstage. 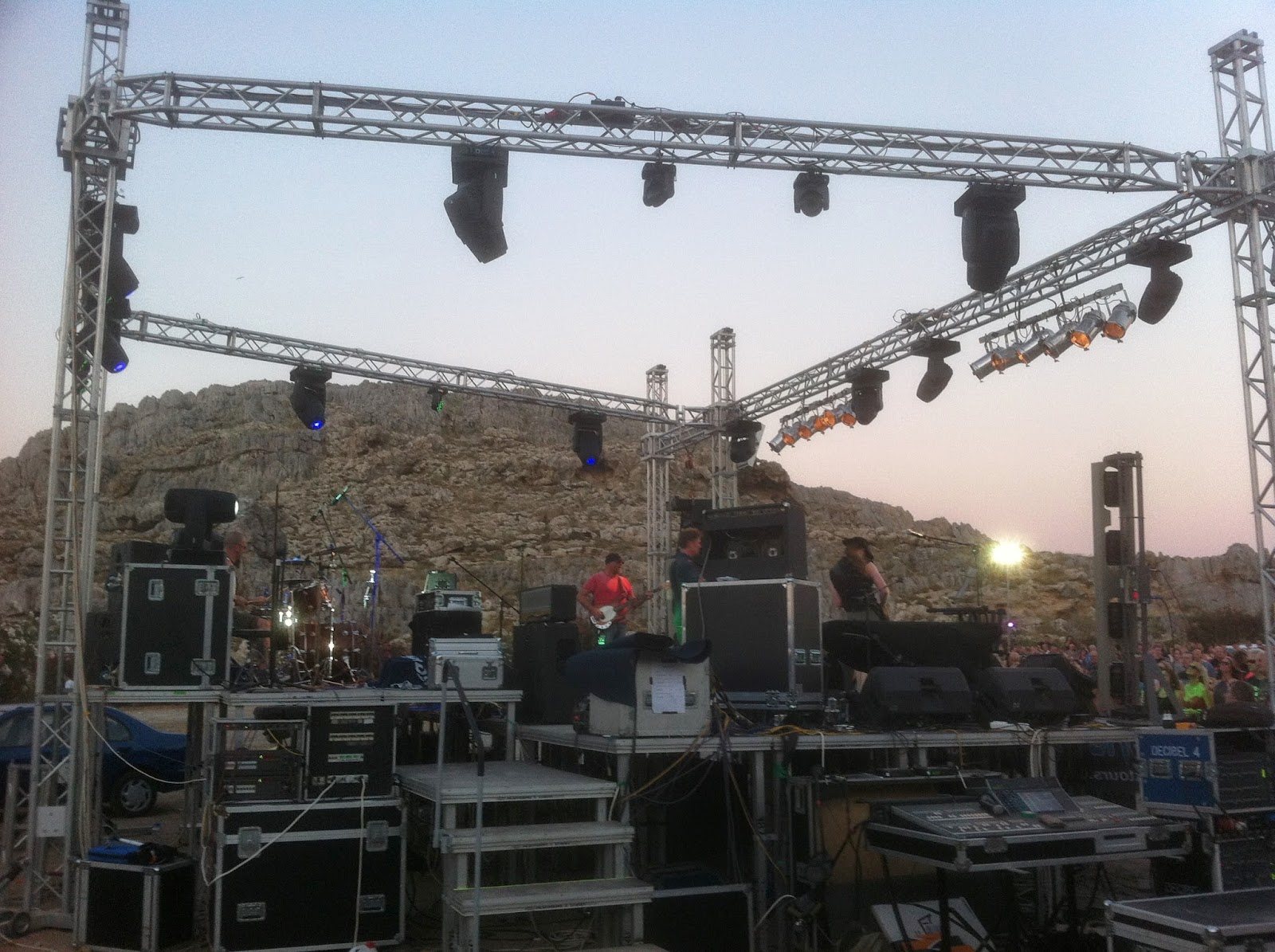 The feeling I had before going onstage was amazing. Stepping up onto a good sized stage, with technicians all around and 2,000 people in front of us making a hell of a racket, I felt like an honest-to-goodness arena rock star. We launched into the set and just went for it. The gig wasn't without its challenges - the wind was blowing like f*** and the subsequent effect on the sound (not to mention getting an eyeful of sand every time you opened your eyes) was a bit of a sensory barrage. Me being blind as a bat on the best of days, I didn't quite grasp the magnitude of the crowd in front of us. It wasn't until I saw the photographs afterwards that it hit me. "Oh....there were quite a few in, weren't there?". 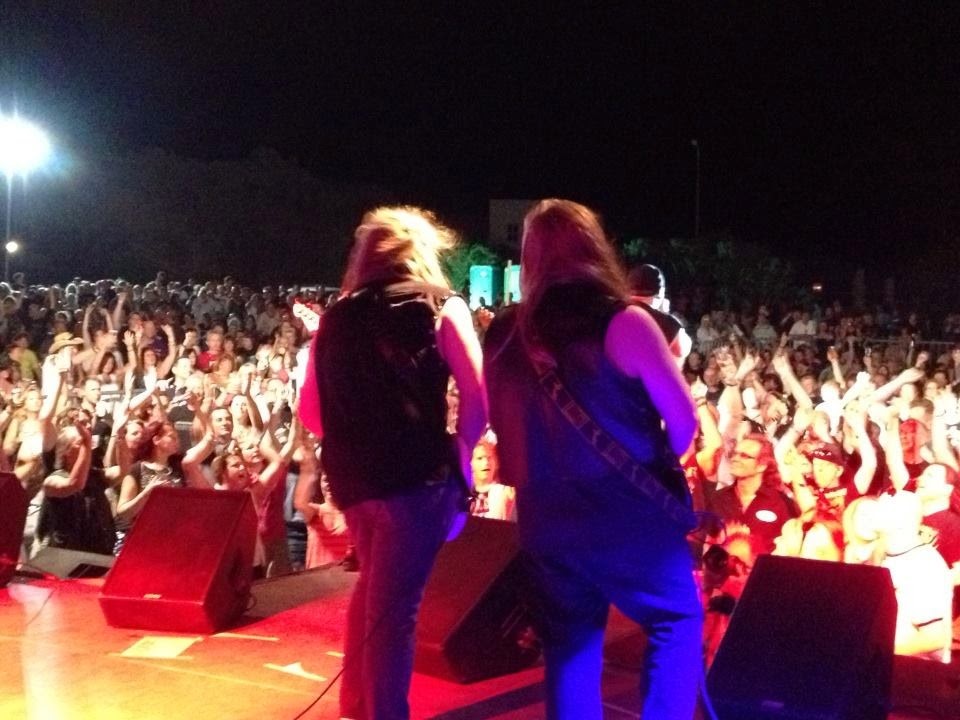 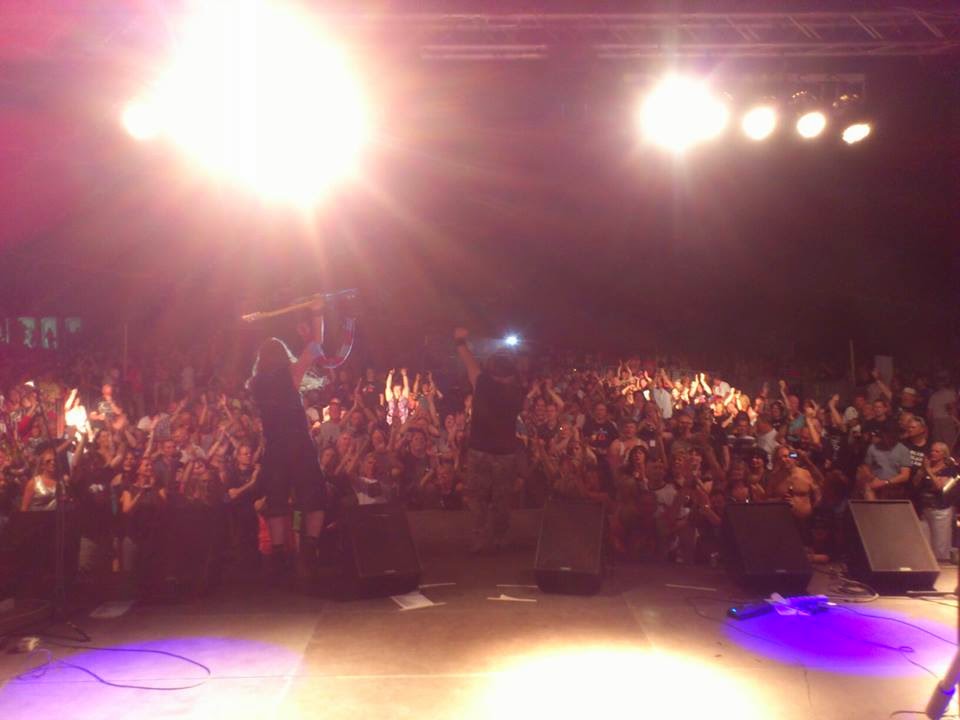 "There must be some mistake, I ordered the medium-sized arena crowd?"

Straight after the gig we were run back to the digs for a quick shower before heading back to the arena to check out Stargazer and The Bohemians, who were doing an early Queen set. There followed a very, very long evening/morning of drinking. My notes of this trip start to tail off at this point, but I remember leaving the lads queuing to get into one of the clubs and walking myself back to the apartment in the blue light of the approaching dawn.

On the Monday morning I woke up at what I thought was 9:30am, but it turned out to be past mid-day! I met up with Duggan and had a wander around, checking out one of the pool parties and heading to the Ice Bar to meet some friends of his family who had made the trip out to see us. We had made arrangements to have dinner with the Sack lads, and I duly met Dan and his missus for pre-dinner drinks and to await the rest of the crew. Slowly (very slowly....about an hour later than planned) everyone else arrived and, in varying states of advanced refreshment, we walked to Maria's. I had a beautiful dinner, sampling the spetsofai again followed by a Greek platter. Off to Yanni's again for another night of drink. I had decided at this point that I simply couldn't drink any more lager. I did get called a 'lightweight', but to be honest, if knowing when to stop drinking shit lager makes me a lightweight, I think I'm winning! 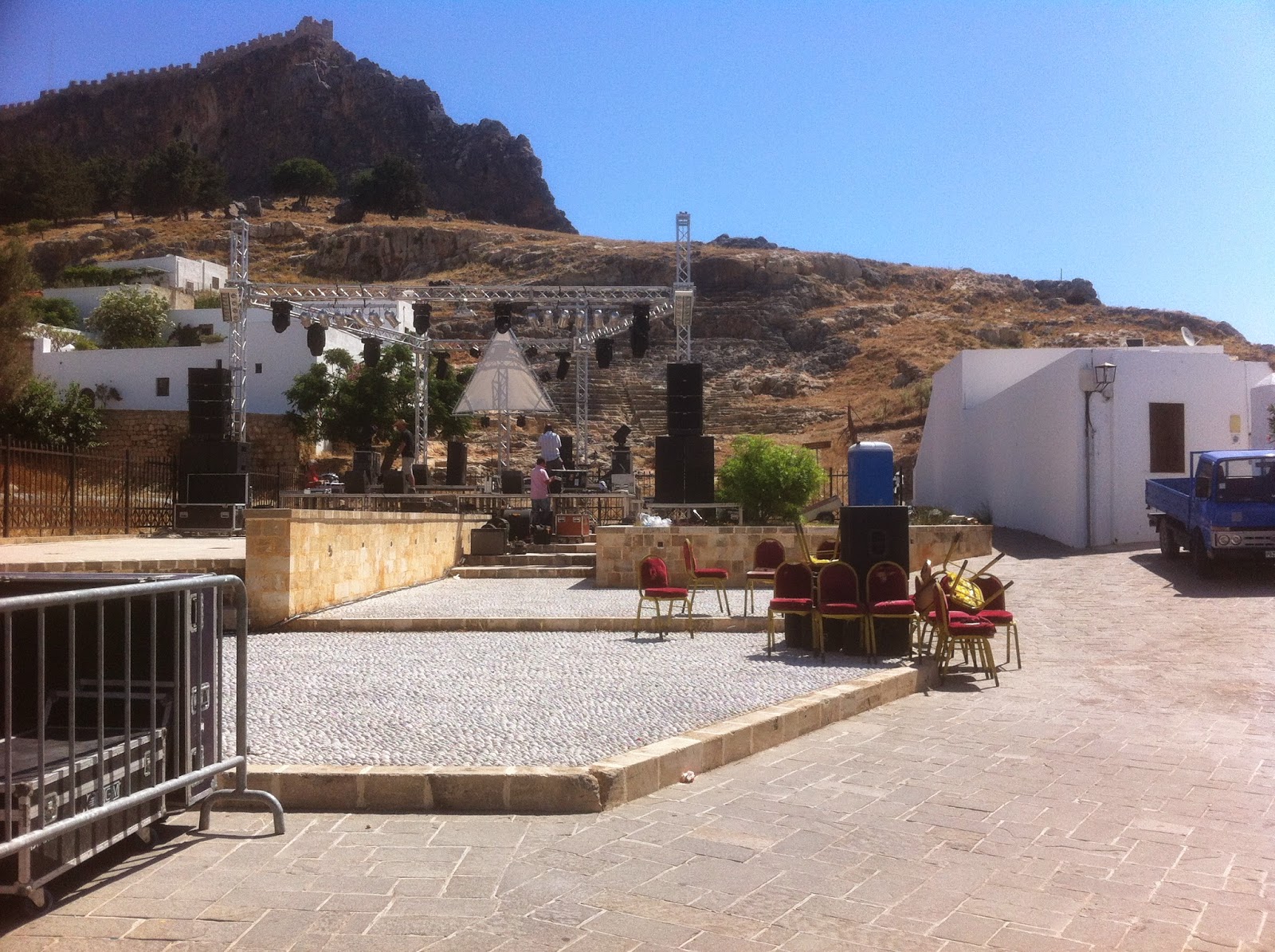 Tuesday was the day of the Think Floyd gig. I went into town for breakfast and came across Paul, who was frantically searching for a cool box that had gone missing during our gig. I did my best to assist but the search was proving futile, so I met Simon for breakfast and went shopping for presents. The village was ringing out with the Floyd's soundcheck, which seemed to go on for most of the day (you've got to get these things right, though it did spoil large parts of the setlist!). Resisting the temptation to bring back some sets of "sex dice", I bought some sensible gifts for the folks back home and headed back to Atmosphere for some drinks. Ozzy and I decided to go and join Swifty and Duggers on the beach, which was quite a sight to behold. The view was postcard-perfect. 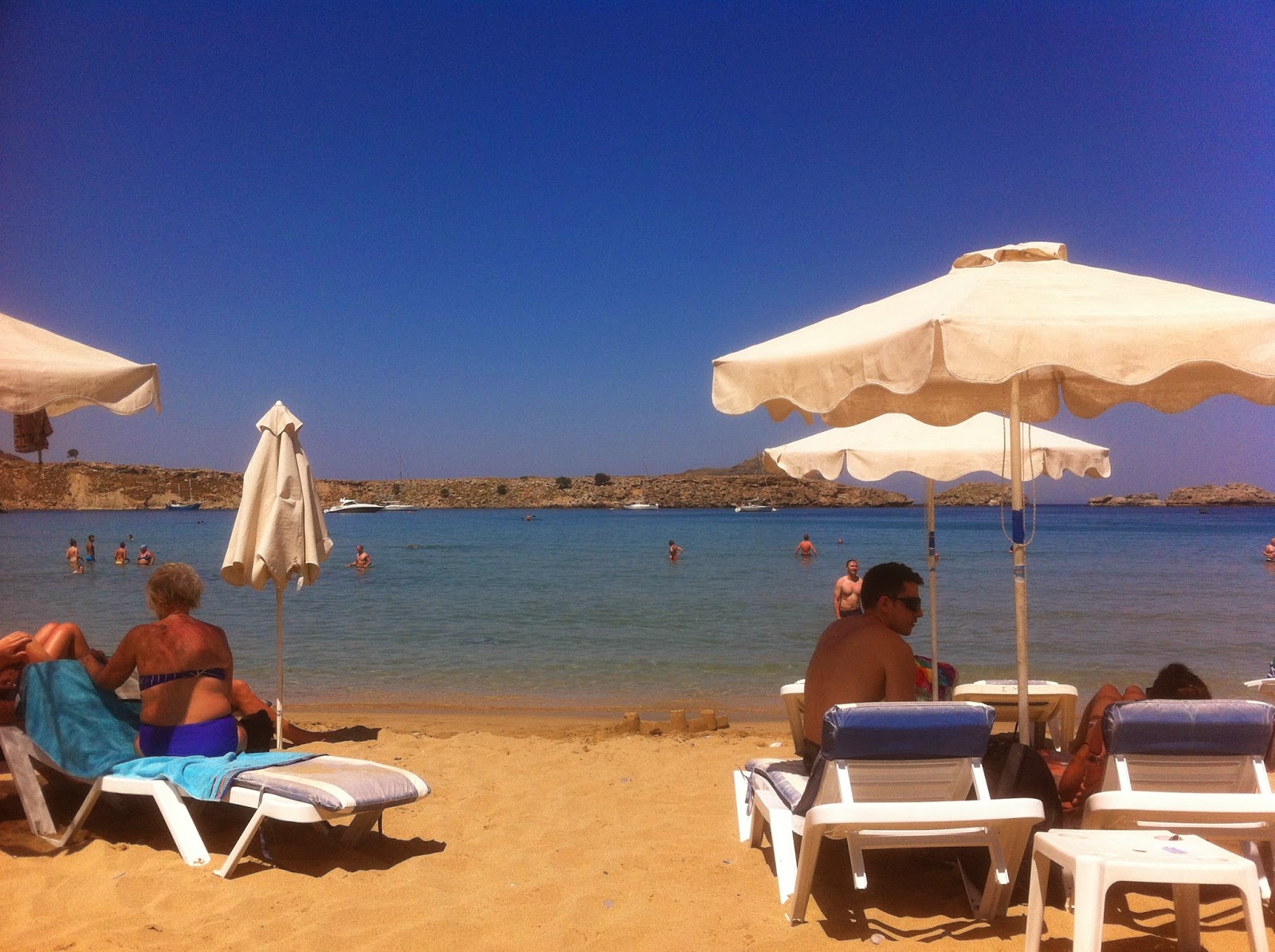 Admittedly, the main source of light in this shot is not the sun. It's pasty white Englishmen with no shirts on.

I get bored of beach-dwelling very quickly, so after a beer on the beach I went back to Atmosphere for a beer in the bar with Sacko and Mrs Sacko. I had begun to feel as if I was in some sort of exchange program - by this point I had spent more of the week with Sack Sabbath than with Hi-on!  Dinner was consumed in Agostini's on the roof, and while we were finishing up Think Floyd were just getting going. Swifty and I are massive Floyd fans, and we absolutely lapped it up. It was actually quite an emotional evening for me, and a lovely musical full-stop to the amazing week away. 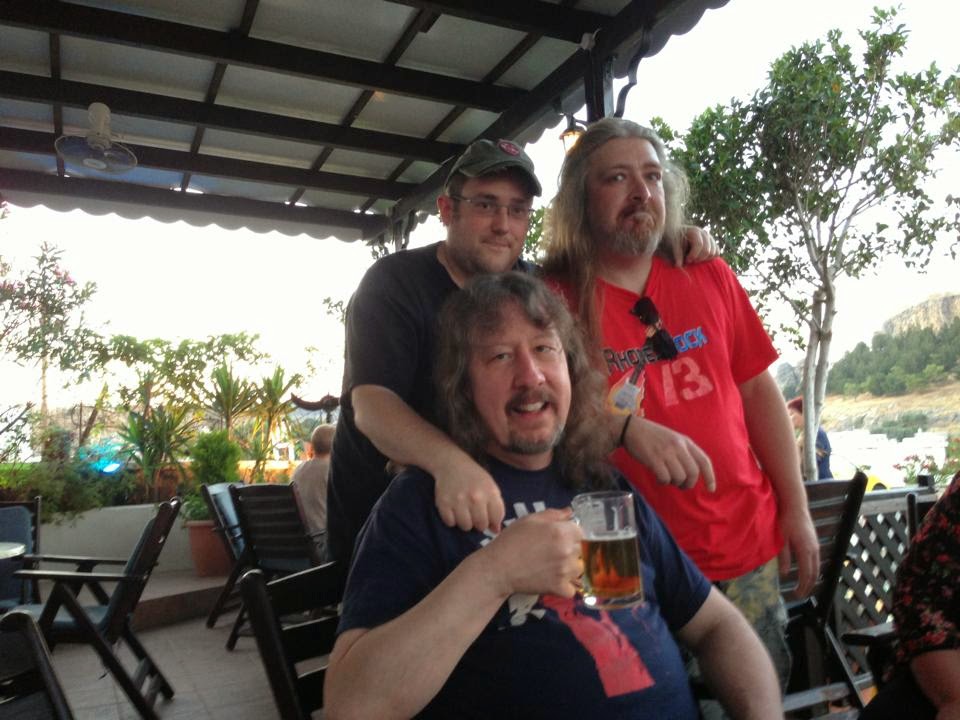 Guitarists: taking a break from slagging off the singers!

Our last day on the island was a fairly quiet affair, with goodbyes being said over final pints of piss lager. The journey home was fairly uneventful, except for a slightly alarming moment with another plane visible out of the right-hand windows. Swifty, our aerospace nerd, said this would have technically been considered a 'near-miss'! Upon arriving back at Duggan Towers we went straight out for a curry and a few drinks before getting down for some sleep. The next day we said our farewells and The Rhythm Section drove me back to Cambridge for my train home.

And there you have it. Looking back on that week after nearly a year, I am still blown away by the whole experience. I must admit, playing the gig itself was almost incidental. I got to spend a week in a beautiful place, with some of my dearest friends. I made lots of new friends, and enjoyed an extraordinarily well-organised event.

Well done to absolutely everyone involved. Special thanks to my friends in Sack Sabbath, a wonderful bunch of guys to spend a week with and a top band to boot. Extra special thanks to Paul, Jane and Eddie of Classic Rock Tours for giving us the opportunity and looking after us all week. And finally, to my former colleagues in Hi-on Maiden, thank you all from the bottom of my heart. It was pretty f***ing special.