I've got so many blogs to write, I wasn't quite sure where to start. It's like walking into the bathroom in the morning; do you void your bowels first, or do you break with tradition and clean your gnashers before doing anything else? Or maybe just go straight in the shower, but when you're in there, what gets scrubbed first?


So I thought I'd start with the weekend of 17, 18 & 19 May 2012. This particular foray was one I'd been looking forward to for some time, as it meant visiting two venues which are always highlights for us; not only did we get to visit our fine friends Andy and Tiggy at Riffs Bar, but then it was off to Nijmegen - our home away from home. 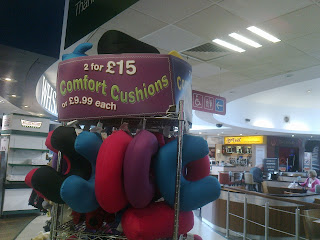 Comfort cushions - for those aching bott-botts on the road...


First, the minor problem of getting us all together in one place. Since Steve "we can have a beer now?" Harristopolis joined the ranks, this has been considerably easier. No longer do myself and Nicko "Swindon, I am in you" McBrain Jnr have to trek from railway station to railway station; we merely have to meet the bass player in NW6 and hop in the car. Bostin'. This is even better now he's finally hacked the radio in his second-hand Vauxhall. Rush. Rush, all the way.


Before I'd even left home, however, came the telephone call I always expect, nearly always receive and often dread. Adrian "it won't start" Swift got on the blower to inform me that, no sooner had he picked up the van and stopped for motion lotion, he'd broken down. As starts to the weekend go, it wasn't quite as bad as "Er, we can't get to Guernsey", though it was less than desirable. Thankfully, a short while later I had another call to let me know he was on the road - "We'll be astronomically late, but we'll be there" was the word. With a sigh, I set off to meet the skin-beater.


As I emerged from the exit at Queens Park, some sort of altercation had taken place; there was a blur of tracksuits running off into the distance, accompanied by some colourful language from a young lady left behind. Rather than become embroiled in any criminal investigation, I suggested to Nicko that we move a safe distance away. Thankfully, 'Arry arrived within minutes and we were on our way. An update from Swifty told us that he wasn't even in Leeds yet. Time for an extended junk food break, then. 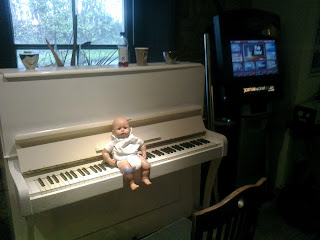 
We arrived at Riffs Bar in plenty of time, and settled ourselves in. I took up residence on the piano with a cup of coffee, and was quickly appointed 'The Doctor' by Andy & Tiggy's little'un, whose beloved doll was suffering from a number of minor injuries requiring my undivided attention. Bless. From then on, it was a long wait for Swift. Punters started to arrive, including my good friend Boba Fett who I have not seen for a number of years. Mr & Mrs Eddie arrived, and the word came that the van would roll up at 8:30pm. "All hands to the pump", said the text message. And it was!


A very beleaguered-looking Adrian Swift wheeled some gear in, with Bruce "Sh*t! Sh*t! Sh*t, and more sh*t! Knackers!" Dugginson in tow. The next fifteen minutes or so were a blur of equipment and noise as we rushed to get the show on. Then it was upstairs to get changed before "Doctor, Doctor" rolled and we were on.

Moonchild
2 Minutes to Midnight
The Trooper
Wrathchild
Still Life
Killers
Infinite Dreams
Murders in the Rue Morgue
Wasted Years
Back In The Village
Run to the Hills
Seventh Son of a Seventh Son
Powerslave
22 Acacia Avenue
The Number of the Beast
Hallowed Be Thy Name
Iron Maiden
---
Fear of the Dark
Bring Your Daughter... ...To The Slaughter
Running Free 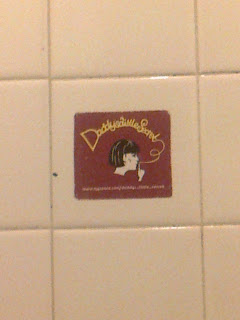 The view from the chod.

It was LOUD. And it was good! We had a blast on stage; the relief at finally making it, after what had to have been a frustrating day for Duggers and Swift, was palpable, and the rest of us were just pleased to be back doing what we love doing. Steve The Greek was, once again, an absolute pleasure to share the stage with, and the crowd at Riffs didn't disappoint. Even on a Thursday night, the people of Greatfield know how to rock.


The load out was typically dull apart from one rather memorable moment whereupon I decided I'd be able to manoeuvre the bass cab out the narrow corridor and up the steps by myself. I took a little bit of a waspie, and "Manic's Massive Tumble", as it came to be known, quickly passed into legend.


The original plan for this Thursday had been to get to Swindon, get on, get off, and get back to mine for some kip. It didn't quite happen that way - we arrived at my gaff at 4am, and had to be up in around 2 hours. It was a sad sight; watching these poor, beaten troopers stumble, zombie-like, into my flat. Nicko wasted no time making sure he laid claim to the one available bed, with the rest relegated to the floors of Manic Towers.


In Part Two, beer is drunk!


Love,
Dave "didn't say anything good enough for a diary nickname, but fell over once or twice" Hurry