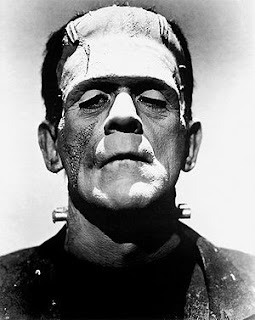 Time for a graveyard smash!
Perusing the gig list just before leaving on that beautiful sunny bank holiday Saturday...

...it occurred to your humble blogster that there are an awful lot of gigs in the South West in the early part of this year. This means a hell of a lot of driving for Adrian “practical van hire?” Swift, a lot of staring at the motorway for our other two Northerners, and some epic train journeys for yours truly and the young’un. This particular journey was quite easy, though it could have been much worse. Nicko “lengthening his wang” McBrain Jnr had booked himself on a later train than I, and had elected to be picked up by the passing van in Exeter (there’s more to the van story...I’ll get there in a bit!). I was to go to Plymouth, then double back on the tracks to the nearest station to the gig (Ivybridge). However, the night before I was contacted by the effervescent organiser of the Monster Mash, Martin “I’ll do some poetry” Cording. The conversation went something like this:

Martin: “Where you do want picking up?”
Me: “Ivybridge, please!”
Martin: “How are you getting to Ivybridge?”
Me: “Via Plymouth.”
Martin: “You silly c*nt. Get off at Totnes.”

Unfortunately, my train went right through Totnes, so I ended up detraining at picturesque Newton Abbott and being very kindly picked up by Joan and Jim, Martin’s mum and dad. I’d been out the night before celebrating my birthday in classic Hurry style (imbibing an awful lot of ale) and was not exactly full of conversation, so I was delighted to sit back and listen to Jim’s tales of life on the barbershop quartet circuit on the drive to Malborough. Safely deposited at the venue (the first, as ever), I was privy to Quad Damage’s soundcheck and the first pint of a keg of Tribute, kindly donated to the event by the wonderful folk at Cornwall’s St. Austell brewery.

The van arrived. Well, I say “van”. It was more like a box of Tesco value dental floss on wheels. Selectadrive, who have served us very well over recent years of van hire, had unfortunately run a bit low on big vans. Our intrepid leader did the best he could, and the best he could was not quite fit for purpose! 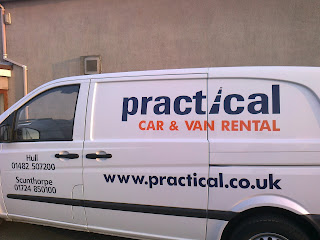 Not so practical...
We loaded out all the gear into the backstage area and started to set up onstage. The boys all looked road-weary and rather fed up, in stark contrast to my unusually chipper demeanour (Tribute make Hurry feel nice). Steve “blowjob joke here” Haggis had set off at some ridiculous hour from Glasg’ae’, and Bruce “the vomit comet” Dugginson seemed to be suffering from the more acute effects of motorway hypnosis. Young Nick had ridden in the back for the hour’s drive from Exeter, and had stepped blinking into the sunlight apparently disbelieving that he’d survived without being beheaded by an errant cymbal or two. Brave soul.

A few pints later and it was nearly show-time. I’d been steeling myself, as Malborough would be the debut of the brand new wig. Constant Readers may remember a problem arising in Plymouth whereupon my headpiece had taken a waspie atop Eddie’s Prong, leaving me with what Swifty termed “a fanny” on my head. That wig’s swansong was in Canning Town, having served two bonces admirably (both myself and Michael Krispe of Hulloween had played beneath it’s fragrant locks). My new syrup is named “Ashley (in Spring Honey)”, and is a marked improvement on it’s predecessors. 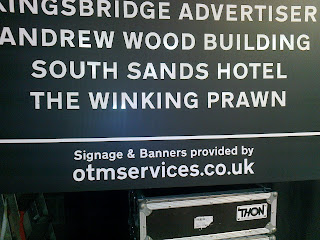 The winking what?
After a few hairy moments (pun absolutely intended) during opener Aces High, I settled in to the gig and played really well. ‘Aggy had, as he kept (and continues) to remind us, lost a fair deal of weight recently and was bounding around the stage with aplomb. Poor Duggers wasn’t feeling all that well and had to depart from the stage on a few occasions to shout lunch, and Swift (shattered from the long drive no doubt) was also feeling somewhat the worse for wear. Despite these setbacks, we played a blinder and went down really well amongst a receptive charity gig audience. The night was in memory of local musician Dave Sharp who had succumbed to cancer in June 2009, and in aid of a memorial fund providing music opportunities for local youngsters. It was an absolute honour to play, and to be so warmly received and well looked-after by organisers and punters alike. Cracking night, even if Swifty and Duggers needed St. John’s Ambulance attention afterwards! After packing down, we retired to Martin’s pad where we were treated to a supper of tea, Jammie Dodgers and koftas before turning in for the night.

Dave Sharp
20 April 1971 - 27 June 2009
The next morning we were taken for a splendid breakfast at local cafe The Meeting Room (thanks to the good folk there for laying on the grub and opening a bit early for us after a heavy night!). Then it was time to assess the problem of getting 5 people to Swindon in a 3-seater van. That’ll be me back on the train then, with ‘Aggy in tow! We were dropped at Totnes and said our farewells to Martin and Alice before boarding the next train to Bristol (where I believe we passed, like ships in the night, super-fan Spook!).

After a quick coffee at Brizzle, it was on to Swindon. We ended up in The Queen’s Tap, which was a site of happy drunken memories for your humble narrator. In it’s previous life it had been a rock pub, and I had seen our old friends Ironically Maiden a few times there). A quick call to Swift confirmed that the road-bound members had arrived at the venue, and in no time at all the Practical van was outside the Tap waiting for us. 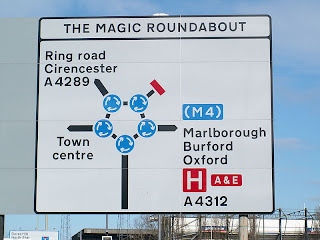 I didn't take any pictures of Swindon, but here's an idea of how silly it is.
Riffs Bar is always a highlight of the year, with Andy and Tiggy always going out of their way to look after us. This time was no exception, and after loading in and sound-checking we were sat down and fed a beautiful dinner. A number of support bands had been roped in this time to help fill the place up on a bank holiday Sunday, and it bloody well worked. In no time at all it was show-time, and we hit the stage. Another awesome gig at Riffs Bar to a packed crowd and two encores! Swifty’s amp didn’t enjoy the last song though – it’s fuse blew halfway through!

After packing down I said cheerio to the lads and was borne away in the KISSmobile by Eddie “Satellite 15 is the best thing ever” the ‘Ead and Mrs Eddie to their nearby pad, and in the morning I was dropped at the station for the last leg homeward (the very last journey I ever took with my Young Person’s Railcard....sob sob!)

An excellent weekend – two gigs, with two very kind sets of organisers looking after us, topped off with Eddie making me a bacon sandwich! Class!